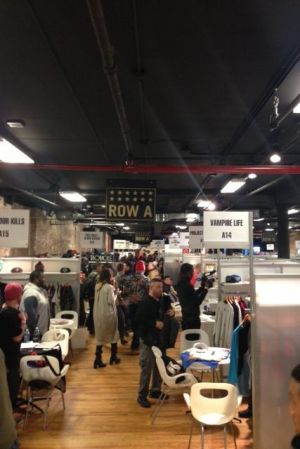 Impression from the fair grounds
Stories

by Christopher Blomquist and Sabine Sommer (formerly Kühnl) — January 24, 2014
The latest edition of the Agenda New York trade show wrapped last night after a successful and heavily trafficked two-day run. The show, which focuses on action sports and streetwear, was held yet again at a two-level space at 82 Mercer Street in SoHo.

“We are very happy with the result at Agenda New York. Brands were worried that it would be empty because of the weather, but obviously it's really busy,” Agenda founder Aaron Levant told Sportswear International from the show floor yesterday. “In July we will change the location and move to the Javits Center. We need more space for the New York edition as we want to make it more important and create even more of a street lifestyle event. Long Beach features about 700 brands, Las Vegas has about 250 brands. In New York we currently have 160 brands but we can definitely grow.”

Among the brands on display was Waimea, a new line of reasonably priced men’s streetwear designed by New York-based creative director Ross Fredman. Featuring bold and colorful prints inspired by undersea life and science fiction, the brand employs a lot of chenille and velour. Fredman also donned a 3-D shirt it offers that gave him the look of a pumped up superhero.

Also new was the relaunch of the 1990s streetwear brand Cross Colours by Carl Jones. Inspired by archival looks that had been updated for modern times, the brand features numerous bandana prints and varsity jackets, which have synthetic leather this time instead of genuine leather a la the 1990s. Jones said reaction to the line was strong and that he had signed numerous accounts at the show.

Upstairs, outdoor giant Burton showed its three apparel collections, including the BRTN line in mostly blacks and grays, and numerous accessories. Brand manager Luis Calderin and communications manager Taryn Levy both said that they were happy with this edition of Agenda.

The one complaint from retailers was that the show did not feature enough hard goods. “I like the show here in New York, but I also visited the Long Beach edition which is bigger and caters more my needs since it features more of the skate brands we run. I used to visit ASR and liked it because it also carried hard goods,” said retailer Gary Vu of Vu Skateboard Shop in Baltimore, Maryland. John Mossmiller of Skatology in Bel Air, Maryland agreed: “We sell hard goods so I feel it would be good if Agenda had a hard goods corner as well.”

Agenda was again part of Modern Assembly, an alliance of independent trade shows that also includes Capsule and Liberty, which were accessible by shuttles but held far away on the Lower East Side and in Chelsea, respectively. “It would be great if all trade shows in New York could be located closer to another but it is really difficult to find locations that are not booked at the same time,” said Levant.

The next Agenda will take place in Las Vegas February 17-19.