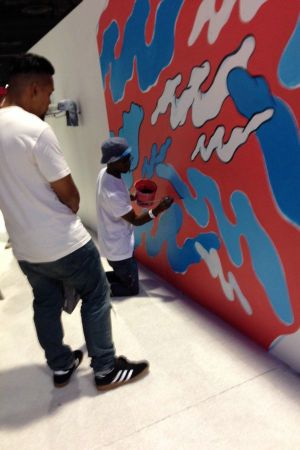 When Agenda tradeshow added Las Vegas last year, it became an unstoppable force in skate, surf and all things action and streetwear. Fortunately, their growth hasn’t slowed down the local shows. The Long Beach convention center location felt even more crowded than usual last week. With the creative brand building concept Agenda Emerge; the skater world of Agenda Berrics; Agenda Woods, the artfully curated show-within-a-show; and, of course, Agenda WMNS, the female-centric section, Agenda is proudly growing and the energy is soaring. In addition this season, RVCA women’s presented The Babe Show, featuring works by female creatives and a limited edition print zine.

Down on the show floor, there were the usual big boys like Hurley and Billabong along with divisions within larger companies such as Dickies, Levi’s and Nike that have dedicated themselves solely to surf and skate, and sell exclusively to those buyers. In contrast, smaller company Luv Surf made their debut this season, providing a youthful, bright female selection of tanks, cover-ups and breezy skirts that, as the brand says, “connects their customers’ lifestyles to the beach.” Across at The Woods, luxury menswear brand Matiere presented their collection of fashion forward drawstring pants and relaxed shirting.

The art of the carryall continues to grow. Jansport made their presence known with all manner of flag or zebra stripe backpacks and everything in between. Poler Stuff showed their line of tech friendly totes while Herschel gets even bolder, adding crackerjack streetwear design team Jon Warren and Jules Gayton to their team. 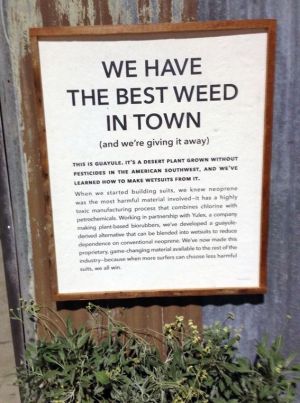 Outside Patagonia booth
10 Deep had a selection of very cool patched flight jackets while Ethika and Saxx brought out the high performance boxers and Yea Nice Beanies and Neff showed every imaginable style of the unrelentingly cool knit headwear. Ambig brought their spring tees and hoodies while Tom’s continues to grow their one-for-one program to now include eyewear. The Tom’s shoe assortment now includes lace ups and espadrilles.

In among the streetwear, Agenda keeps its roots strong with an ever-growing abundance of skate decks and supplies from the likes of Suicidal Tendencies, Boy Town, Modus, Circa, Surplus Distribution, Switchboard, Baker Boys and Avenue High to name only a few. And the attitude prevailed with the smell of pot wafting sneakily around the show and brands like Osiris shoes posting a huge “Death to Hipsters” sign in their booth. Bling seems to be making a comeback too with a huge number of folks like Gold God and King Ice hawking big, gold medallions.

Upon their relaunch, Vision Streetwear invited visitors to share their retro stories and memories of the brand while, across the way, Snoop Dogg’s See You Monday womenswear had marijuana print leggings and sexy plaid bathing suits. The selection of brands and services were rounded out by the likes of Cure Shoe Cleaner, a necessity to keep kicks in shape and Shopify which helps brands represent themselves either online or in store. 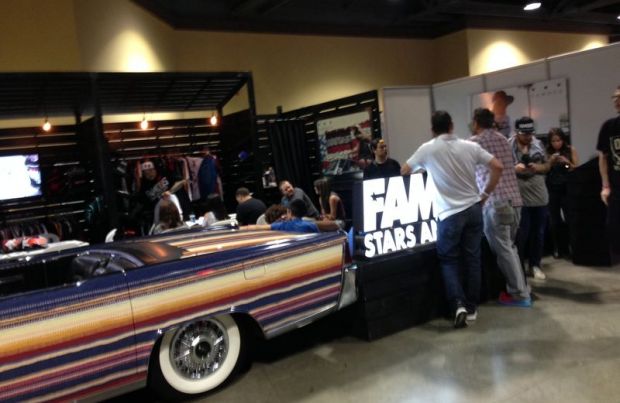 Outside Famous Stars and Stripes booth