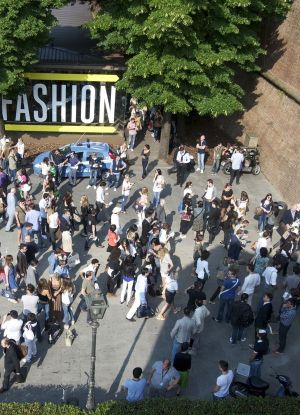 by Maria Cristina Pavarini — June 15, 2011
The 80th edition of Pitti Uomo has started yesterday in a positive mood. Crowded pavilions, happy faces and a whirlwind of initiatives have welcomed the season’s start of this edition focused on s/s 2012 previews. Following the usual trend, on the first day most Italian visitors were around, though many people were walking through the halls and colorful and mostly renewed pavilions are showing that most insiders want to profit from the upcoming season because difficulties are not over yet.

Among most visible trends, there is a strong comeback to workwear – both revived or the classic way – as seen at Carhartt, Museum, Smith’s  with chambray revisited shirts and jackets made out of high-tech fabrics and modern, though functional details. Traditional sportswear inspiration – as fishing and hunting translated into safari jackets or functional jackets as those worn by the young Ernest Hemingway – rule at WP Lavori in Corso, though reinterpreted with a twist of new materials, cotton fabrics laminated on the inside, new functional and modern aesthetics as seen at Woolrich, Barbour, Woolrich Woolen Mills and a new BD Baggies corner concept reminding of a laundry interior. Ramié and cotton-blend sweatshirts at Woolrich, Scotchguard 3M breathable functional blazers and high-density cotton packable trenches at Woolrich Woolen Mills are some of the highlights on show.

Reversibility is another hot trend as seen at C.P. Company that celebrates the 80th anniversary of the luxury watch brand Jaeger Le-Coultre reversible watch with a double- face jacket. Dockers that – in addition to new more formalwear-inspired and upper market chino pants – offers khaki reversible shorts with a colorful Madras lined side.

Jeans in vintage variants rule as seen at Roy Rogers and Edwin. High-quality materials are a must, especially for President, Roy Rogers’ most upmarket extension new line using cashmere and other precious yarns. Scotch & Soda, while betting strongly on US markets and, secondly, on Asian markets, offers a wider range of its Amsterdams Blauw top-end jeans products selection.  Also noteworthy is the return of Jesus Jeans, a historical, provocative Italian jeans brand that had stopped production in 1992 and is now being relaunched on the Italian market and hopefully sold internationally starting from s/s 2013. Also ready for relaunch is the Rifle comeback with a new collection designed by Angelo Bruni, long-time designer for Guess.

Footwear bets on a return to color on the one side – as seen at Crocs, celebrating its 10th anniversary with a special series of new products, including a color-sensitive model – and on a more vintage and aged series of sneakers and shoes as seen at Smith’s. 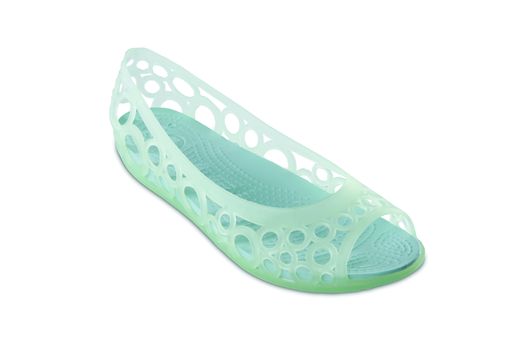 Crocs chameleon style
Relaxed fits, white and blue stripes, small checks in red and white and blue and white are spotted in most collections. Shirts are a must as are casual jackets and blazers in jersey and washed cottons. Moreover, boardshorts are hot as seen at Roy Rogers, in a longer ’60s-like version, or temperature-sensitive and color-changing thanks to a special eco-minded coating.