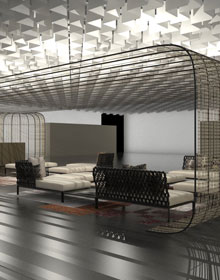 STRONG SHOW AHEAD FOR PITTI

by Tim Yap and Maria Cristina Pavarini — May 17, 2010
Back in April, Sportswear International reported that Haider Ackermann and Raf Simons had signed on to headline the next issue of Pitti_W_Woman and Pitti Uomo respectively in Florence. More details of the 78th edition of Pitti, June 15-18, were finally made available last week at a press reception at A Voce in New York. Highlights of the show, which is reporting higher orders on a recovering economic climate and weaker euro, include a newly redesigned upper level of the main pavilion by Patricia Urquiola, the return of G-Star Raw, and “Made in the USA,” a new project by Levi’s Vintage Clothing. Other must-sees include Roberto Menichetti’s new collection for Brema and Neil Barrett for Sundek. Finalists for the second edition of the “Who is on Next? Uomo” competition have been narrowed down to Camo, Dead Meat, FQR and Maurizio Miri for prêt-a-porter, and AI_, Ozona, Pierre-Louis Mascia and Yuji Miura for accessories; the winners will be announced on Tuesday, June 15. Contemporary American artist Andrea Zittel will kick off her first show in a public museum in Italy, with “Between Art and Life” at Galleria del Costume, featuring over 80 works for the artist, testing and capturing the human experience in a variety of surroundings. The fifth issue of Fashion Magazine also will be unveiled, featuring a guest collaboration between Fred Perry, GQ Italia and Pitti Immagine. Chief executive Raffaello Napoleone also took the opportunity to announce exclusive engagements at Pitti Bimbo, June 24-26, including an exhibition celebrating 60 years of Peanuts, new collections by Fendi and Gucci, and the first ever “Who is On Next?” contest for the childrenswear segment, slated for January 2011.

Update: The main theme of Pitti’s next edition will be “Design Watching.” The show has reached out to 20 international trendsetters in the international community of buyers, journalists and opinion leaders to choose, between tradition and modernity, their preferred design object. Special gigantic design reproductions of these objects will dot the show landscape. Among the “design watchers” at this edition are Roberta Valentini from Penelope, Max Kibardin, Jorge Koch and DJ La Pina.

“My Factory _ Up and coming style” is also a new Pitti Uomo project embodying the new sensibility that has developed from the busy intersection of fashion, street style, music, graphics and new media. My Factory is a new trade segment linked to today’s metro culture where the catch-phrases are experimentation, eclecticism, eco-sustainability and modernity. The focus will be on full and capsule collections by young designers and products from international brands sold in trend stores and online. Sets will be designed by Oliviero Baldini. The names at this first edition of My Factory include Levi’s Vintage Clothing, Red Wing, Soulland, Beat Generation, Dr. Bronner, Rm Williams, BB Washed, Be Different, Gorgeous, Rivieras Leisure Shoes, Sammy Hand Made In Ethiopia.

The New Beat(s) section held at the first floor of the Lyceum will also showcase New Beat(s) n. 14, a special area dedicated to new names from South Korea to Spain and the UK. It features collections by young avant-garde brands that the Pitti scouts discovered during their worldwide talent searches. The labels include La Portegna, Serdar Uzuntas, Groundwave, Il Sistema degli Oggetti, Tee Library and Bustler.

Pitti Uomo organizers expect to welcome about 950 exhibitors, with approximately 35% of them from abroad, on its 59,000-sq-.meter grounds. They also expect to receive the same number of visitors and buyers as last year’s edition, some 30,000 visitors in all, including 18,000 buyers. Of those buyers 6,100, or 34% of the total, were international.