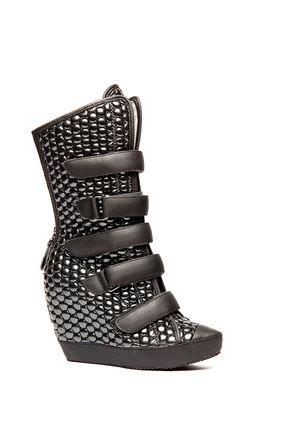 by Maria Cristina Pavarini — March 09, 2011
Micam, the international trade show dedicated to footwear, has just closed its doors registering significant attendance of 38,812 visitors and an increase of 5,97% for its four day course from March 6-9, 2011, in Milan. The event attracted 1,623 exhibitors, of which 607 from foreign countries, presenting their f/w 2011/2012 collections.

The climate was generally optimistic and the show's pavilions were quite crowded with both Italian and international visitors, with the greatest majority coming from Russia and Eastern European countries. Moreover, Spain, France, Germany, the UK, as well as China and Japan were represented very well. Also significant was the presence of Turkish and US visitors, mainly of which were from big US chains and retail groups. According to official figures, the event recalled slightly more foreign visitors with 19,588 people (+3,44% than in March 2010) and 19,224 Italians (+8,68% compared to the previous year).

Italian footwear manufacturers were also showing a positive mood for seasons to come since, after the last 24 difficult months, the year 2010 saw a recovery in export to levels similar to 2008, with over 223 million pairs of shoes exported for €6.7 billion, 15.3% more than in 2009.

The main trends of the collections presented for woman's footwear are inspired by a mix of urban sci-fi warrior inspiration, often punk-influenced and characterized by studs, rivets and crystals, lucid surfaces and techno materials such as metallic mesh, lacquered surfaces, carbon-effect and holographic linings (Logan, Crossing, Fornarina). More urban, the overall inspiration is taken from the bikers' world with biker boots reinvented with skull motives and stud applications (Ash, Philipp Plein, Gas footwear, Catarina Martins, Coral Blue, Tremp). The fabric that was mostly used was brushed suede, used alone or mixed with other materials (as seen by La Martina, Gas footwear, Replay footwear) for boots and sneakers.

A romantic trend is pervading women's footwear - often contaminated by a burlesque and baroque spirit focusing on lace motives, printed or applied onto the surface of the shoe (Stuart Weitzman, Gaudì, Fornarina, Neosens), sexy and inspired by boudoir with silks, velvets and sexy underwear reminiscences. Precious fur details and linings dominate many styles like mink details added to some of Ballin's ankle boots and Mou's mid-calf boots, or Miss Sixty mutton-lined ankle boots. Boots are hot in every length and variant from ankle-length to beyond-the-knee height. Cowboy boots with a pointed heel are hot, mostly vintage-treated and with an ankle length as shown by Art or Mou.

Eco-friendliness, nature and comfort remain hot topics for brands like Art, Neosens and El Naturalista, offering a fancy series of recycled rubber for soles and heels designed with innovative and geometric constructions (Art, Neosens, El Naturalista). El Naturalista has developed a special patented rubber material used in some of its models' soles. The new material has small inner, empty hexagon-shaped columns that provide the wearer a sense of comfort and soft impact absorption. Moreover, some poetic essential design elements inspired by nature and flowers decor some styles of the shoe and boot brands that are mentioned above.