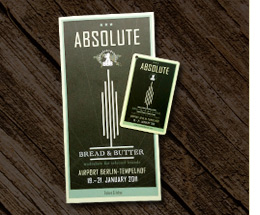 — January 12, 2011
Under the heading “Absolute” the Berlin Trade Show for selected brands, Bread & butter, will be taking place once again from January 19-21 in the historic halls of former Tempelhof airport. The airport grounds with their large open areas have been made winterproof with the help of a creative exterior construction. The organizers are expecting more than 600 exhibitors – about as many as last year, featuring old acquaintances such as G-Star Raw, Diesel, Levi's, Desigual, Custo Barcelona, Wrangler or Hilfiger Denim, which come in from outside, as well as new additions in individual areas, including Snipe, Vila, Refrigiwear, Murphy & Nye, J.Lindeberg or ADenim. “The exhibition spaces are slightly more difficult to organize in winter, but no exhibition space is lost as a result. We are completely booked out and can see that many exhibitors are increasing the number and size of their stands with each succeeding year,” says trade fair boss Karl-Heinz Müller.

After revamping the Sport&Street hall in July of last year, now the interactive playground will become an integral part of the fair and involve a playground and hang-out with live acts and performers in a 400 square meter (4,305 square foot) log cabin on the forecourt of Hangar 1. Created for the first time last year next to the Playground, the Boarding House will remain closed in the winter and is already completely taken up by renovation work in preparation for the big 10th anniversary celebration this summer. “Altogether, more than 75 exhibitors, including new ones such as Alife, Incase, Trainerspotter, Staple or Russell Athletic are going to be in the Sport&Street hall. The response is on the increase, but because of the weather, the amount of space available in winter is relatively limited. In summer, we will have more space available again and will be able to utilize the outdoor areas well,” says Joey Elgersma, Product Manager Sport&Street.

With more than 20 new labels, the L.O.C.K area also promises to have a larger number of exhibitors with labels like Woolrich returning. In addition to the platforms Sport&Street and L.O.C.K., the segments Style Society, Denim Base, Street Fashion, Fashion Now, Urban Superior Men and Urban Superior Women will be represented. Both the G-Star fashion shows and the large B&B opening party - in the style of the 1920s and 1930s - the evening before the opening of the fair in the THF, with live boxing, concerts and gaming tables, will be among the highlights of the supplementary in-house events.

The dates of the summer and anniversary edition of Bread & butter are set for July 6-8, followed by the winter edition from Jan. 18-20 in 2012. “We want to give our international exhibitors and customers reliable planning times – while also giving consideration to the fact that no other event has set binding winter dates for 2012 so far,” says Karl Heinz Müller.

See all fairs and events in Berlin: Fair guide