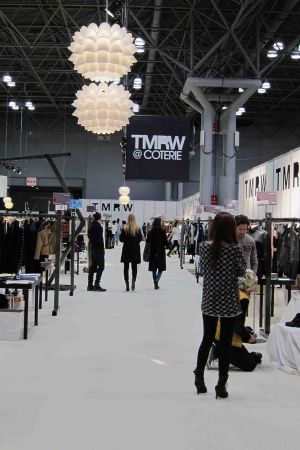 by Christopher Blomquist — February 27, 2014
The seasonal women’s market concluded in New York City on Tuesday when ENK’s massive Coterie trade exhibition wrapped up its three-day run at the Jacob Javits Center. The market actually began on Friday when Designers & Agents opened its doors. Although some retailers such as Stacey Feldman of Stacey Todd in LA said that they were generally underwhelmed by the season’s offerings, there were gems to be found both brandwise and itemwise.

Here are some highlights from the three main events:

Coterie
Once again the largest of the shows, Coterie and its footwear show-within-a-show Sole Commerce featured about 1,500 brands from eveningwear to jeanswear that were displayed across three levels.  The show was again a hub for major premium denim brands such as Hudson, AG and 7 for All Mankind but the big story in that sector was the showing of two newcomers, Driftwood, a super affordable line headed by denim veteran Michael Scott, and Greywire, a new women’s and men’s denim line produced by Michael Press and Elie Tahari. Frame Denim also impressed with its new collection of tops, which were in a variety of styles in solid black, white or blue chambray. The show’s TMRW section, featuring up-and-coming brands, included six designers from Singapore, including Dzojchen, which offers edgy leather and denim creations.

Capsule
Traffic was slow when we visited the show during the final hours of the Capsule Women’s ’s show’s three-day run on Monday but its approximately 200 exhibitors said it was busy over the weekend. For us, the most interesting brand at Capsule was Troa, a new New York-based jeanswear line that uses the natural Korean paper fabric “hanjisa” instead of denim to make its fashionable bottoms. Already stocked by Barneys New York and Colette, this new line is definitely one to keep an eye on. Courtshop also wowed this season with clever and original denim offerings inspired by bondage gear. The show also featured a slew of jewelry lines this season.

Designers & Agents
Designers & Agents returned to NYC this week with a strong lineup of approximately 300 boutique brands, international collections from Europe and Asia, and eco-friendly labels that included the denim lines Good Society and Tortoise. The latter, based in LA, debuted its fantastic women’s offerings (it has produced men’s for several seasons), which included patchwork jeans and a pair created with reclaimed materials. Kudos to co-founder Lukus Eichmann and designer Erynn Feldman!  Otte, the womenswear line initially created by Kay Lee for her stores of the same name that is now wholesaled, served up another winning collection. This one was inspired by her recent trip to Peru and featured bright colors and unusual patterned fabrics.