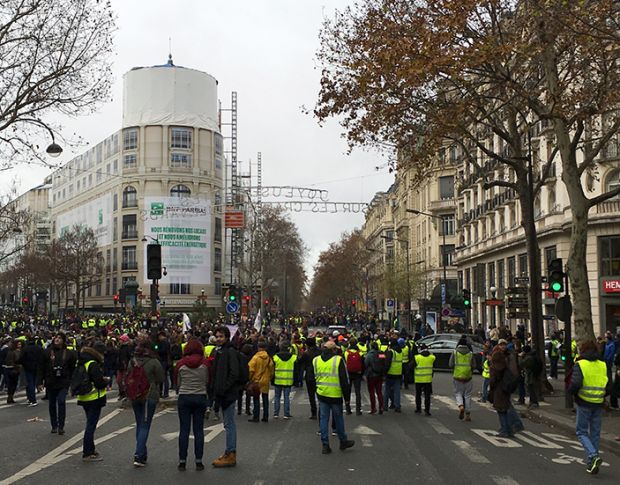 No Xmas Shopping in Paris

After the fourth Saturday in a row of demonstrations by the “gilets jaunes“ (yellow vest), the French Minister for Economic Affairs, Bruno Le Maire, takes stock: "It is a disaster for trade and also a disaster for the entire economy.” Due to the devastation and destruction of the past weeks, many retailers had closed their shops this Saturday as a precautionary measure. All the major Parisian department stores including. Galeries Lafayette, Le Printemps and Le Bon Marché were closed. Smaller shops also barricaded their shop windows with chipboard to protect themselves against stone throwers. The metro stations in the city center up to the Arc de Triomphe were also closed with the consequence that parts of the Paris city center resembled a ghost town. 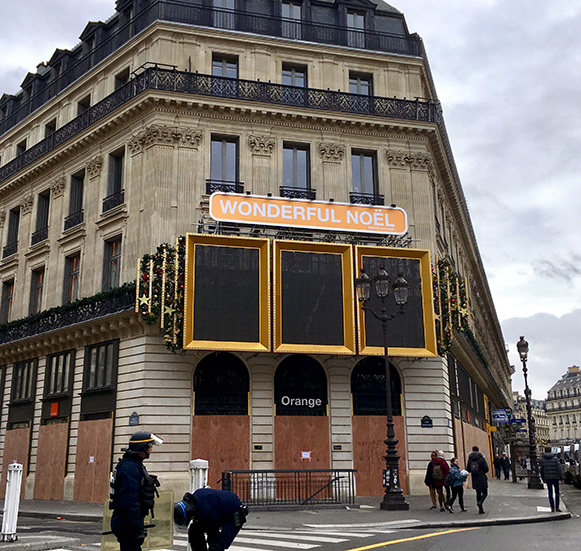 Photo: Barbara Markert
Many shops were closed and barricaded their windows.

As in previous weeks, the area around the shopping mile Champs-Elyssées was the epicenter of the demonstrations. Prepared for this, the state had mustered a large police force. On December 8, the “gilets jaunes“ therefore switched to the Grand Boulevards, i.e. they demonstrated on the main shopping streets Boulevard Haussmann and Boulevard des Italiens. The areas around the Place de République, the Marais and the Sentier district were also affected.

The retail association, Fédération des entreprises du commerce et de la distribution (FCD), is already talking about a loss of sales of €1 billion–in the middle of the important Christmas business. Supermarkets would have lost €500 million and toy retailers €120 million. "I normally make the biggest turnover of the year during this period, but so far it's just a loss of business," complains a boutique owner in the Gallerie Vivienne. "I have to close on the frequency-intensive Saturday. But even if I had been open, nobody would come, because nobody goes shopping during these riots.”

The violence of the last few weeks has also intimidated the Parisian population to such an extent that they tend to stay at home rather than do their Christmas shopping. Also the numerous tourists are only standing in front of closed doors: museums, sights and parks are closed for security reasons. The open Sunday can compensate these losses only partially.

Who are the gilets jaunes? The movement was founded by motorists who demanded the abolition of the emissions tax, a suspension of traffic fines and parking fees in the inner cities. This group has in the meantime been joined by other interest groups, which, among other things, require tax breaks for low paid workers, equality between men and women, a single pension and regular immigration. Many of their demands are already enshrined in the government program, yet many of the demonstrators wish for a resignation of President Emmanuel Macron. That there is now excessive violence and riots is due to the fact that that left-wing and right-wing extremists as well as vandals have joined this heterogeneous group of "gilets jaunes" who have neither a leader nor a spokesman.

Riots across the country, culminating in the capital city of Paris, are expected to go into its fifth week next Saturday.