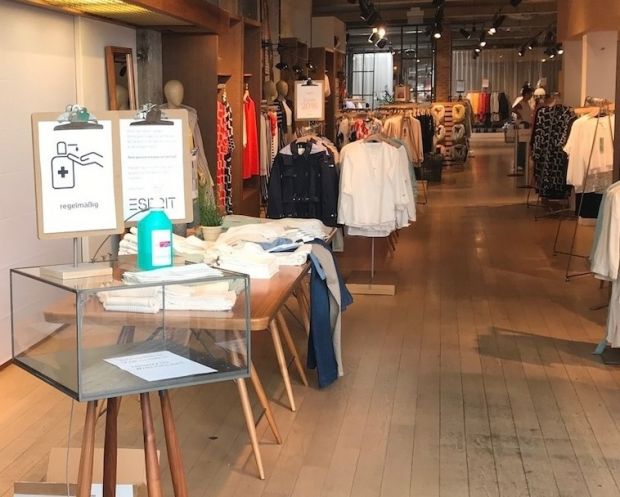 by Sabine Sommer (formerly Kühnl) — April 20, 2020
Day 1 after the lockdown, retail stores re-opened again. But who thinks that in Germany everything runs streamlined is mistaken. I spent the day in Cologne to get a first impression on the returning retail routine.
First of all: there is anything but a routine. ‘Freestyle‘ would be the right term to describe the current situation. That also goes on a certain level for German federal politics, where in every single of the 16 states and cities you find different regulations.

For example: while the big part of federal governments allowed (fashion) stores up to a size of 800 sqare meters to reopen today, Bavaria will follow one week later.
Another example: Bookstores and car dealers are allowed to open no matter what size they are (yes, car dealers. Come on! It’s Germany!).
In some cities wearing masks in stores and on public transport is mandatory, but in general it’s only recommended.
There are many many more exceptions to the rules, which made it especially for retail chains that are spread all over the country a bit complicating. 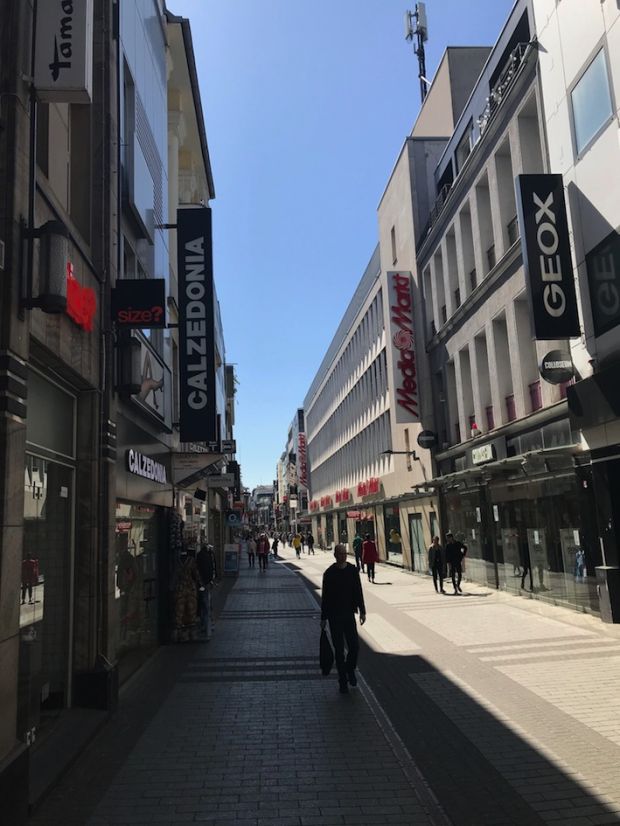 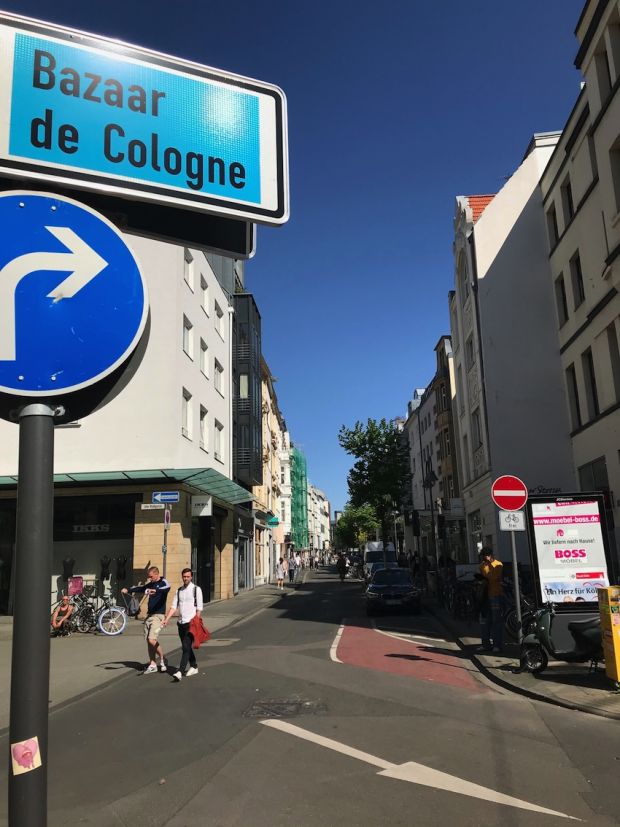 Photo: SI Team
Shopping street Ehrenstraße: usually much busier
Federal law clearly has advantages and disadvantages. But in any case: if the priority of the government’s regulations was to prevent overcrowded city centers during the re-start to keep infections under control, the plan has worked out: Today in Cologne approximately 25-30% of the regular footfall could be spotted on the usually super busy main streets ‘Hohe Straße’ and ‘Schildergasse’ as well as on popular hang-outs such as Ehrenstraße or the individual shopping area ‘Belgian Quarter’ (I heard and read similar things from other German cities).

Certainly the sunny weather helped to bring people out of their homes-if restaurants and cafes would have been allowed to open on a regular basis as well (currently only take-away is possible) it would have been definitely much fuller. 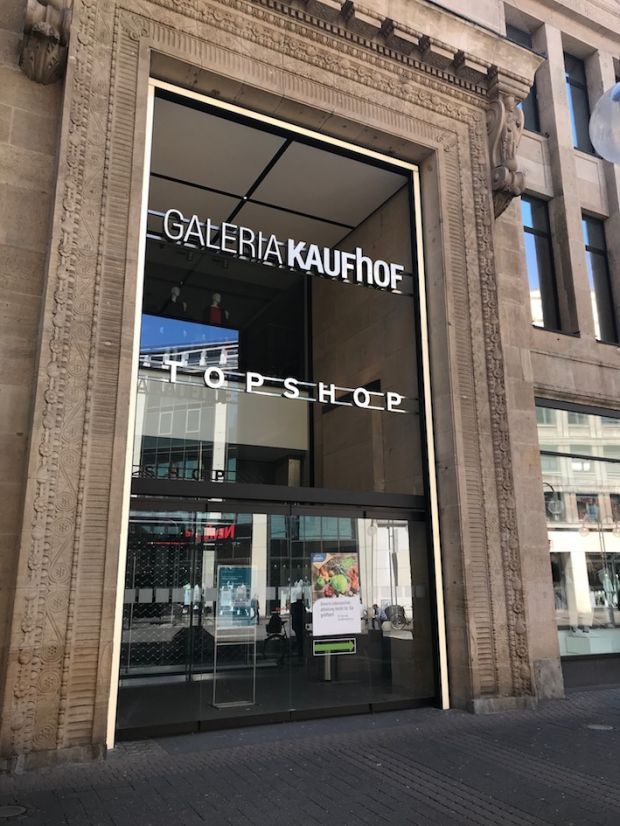 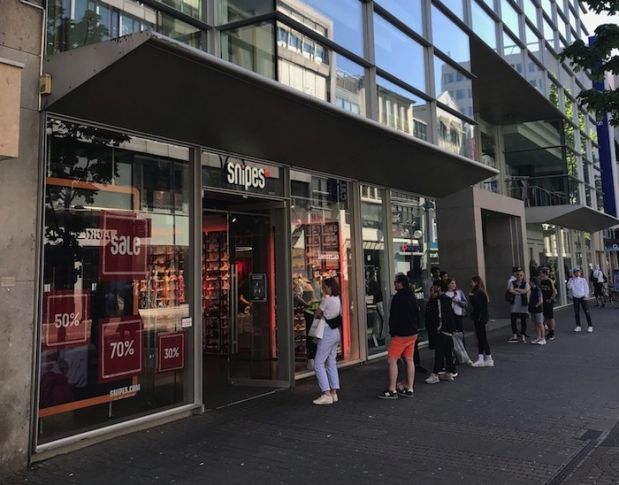 Photo: SI Team
On the same street: Restricted entry at sportswear store Snipes
‘Freestyle’ was then also the picture when walking through the streets. While on one hand the regulation for store size and segment was pretty clear, detailed rules were not: some fashion stores smaller than 800 sqare meters were still closed, others were open.
H&M Group for example left any of its retail concepts (including the smaller sized COS or Arket branches) closed, while Spanish competitor Mango opened the doors. UK footwear chain Office was closed; German footwear chain Görtz – just on the other side of the street – was open. Fossil closed, Swatch open. Douglas closed, Sephora open. You get the picture...

The reasons certainly vary: some retail managers might have decided that opening would not make sense due to an expected lower footfall while others might have struggled to quickly organize staff, a service etiquette and the right amount of masks and sanitizer for eventual customers. 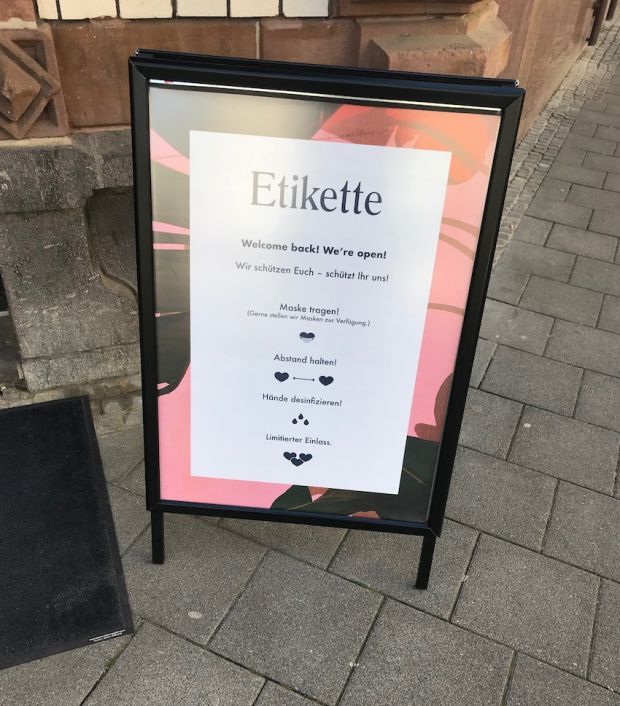 Photo: SI Team
Etiquette sign in front of fashion store Simon und Renoldi
Regarding the latter, every store created its own etiquette: One independent boutique marked on a sign already outside of the store that ‘wearing a mask, disinfecting hands and keeping distance’ are requested, in another one you were offered a mask on request while sanitizer was ‘not yet available’, in yet another one the sales clerk told me that I could handle wearing a mask and/or using a sanitizer as I like. Both were available though.
Differently in a huge bookstore where I was just handed a basket and needed to keep the distance at the cash desk, but apart from that no special rules were announced. 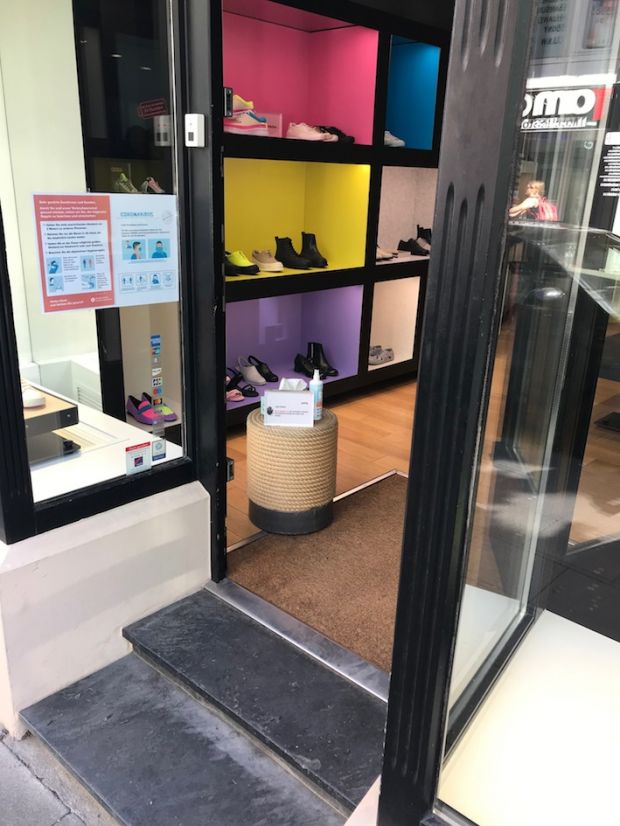 Photo: SI Team
Sanitizer at Camper on Ehrenstraße
Opening hours offered similar ‘variations’: anything between 10am to 8pm is possible, don’t lay to much attention on the official opening hours on the door signs. As a customer you need to bring a bit of flexibility. And as sales staff certainly even more.

In about two weeks the German government together with the single states will analyze the situation and check if further openings are in sight or-if infection level rises again-a stricter lockdown will return.

Btw, my last stop was a visit to the famous ‘Dom’, Cologne’s cathedral. “For praying you are allowed in, but not for sightseeing,” the security lady at the entrance told me kindly. So I went in and lit two candles – hoping that it will be useful for someone somewhere somehow. 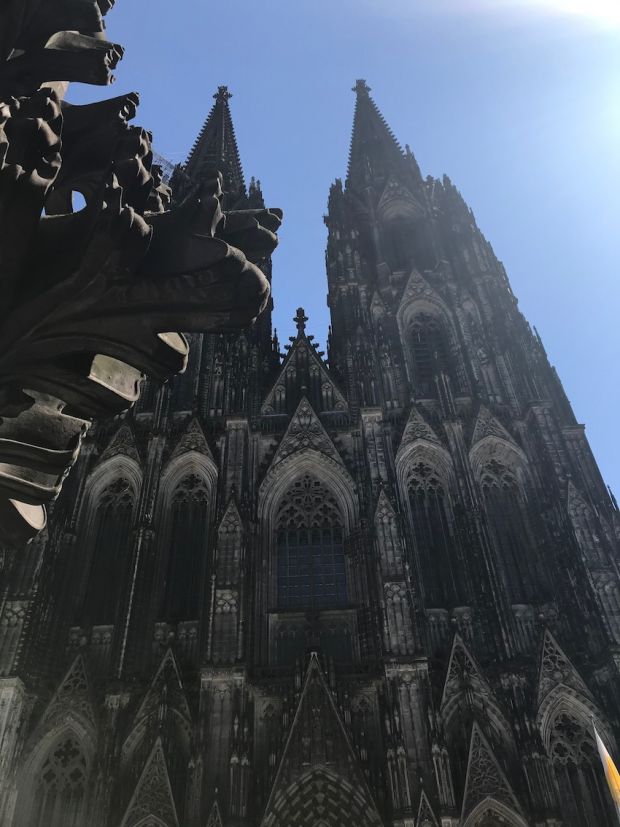 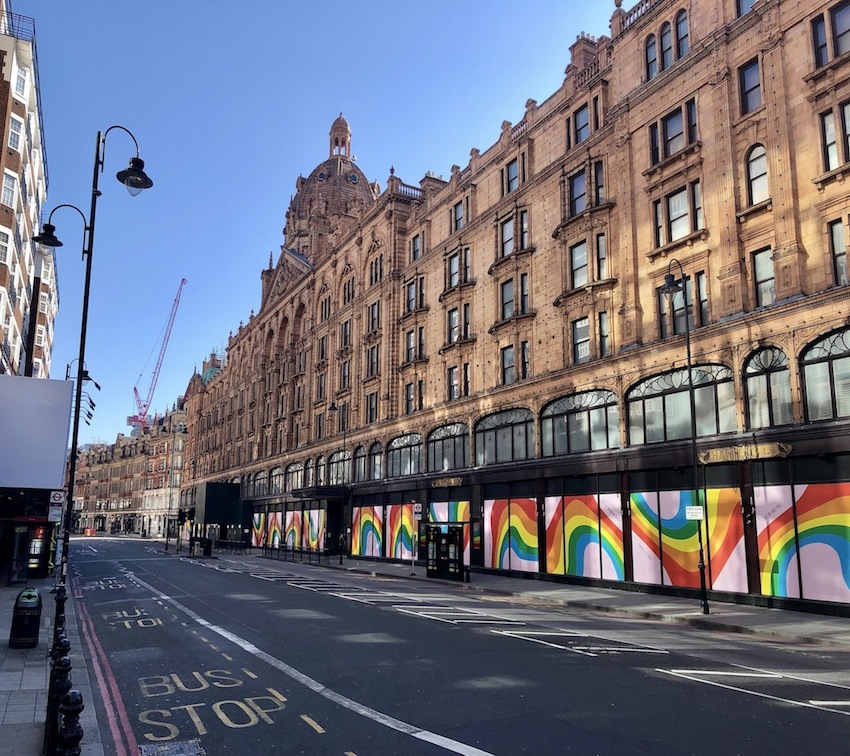 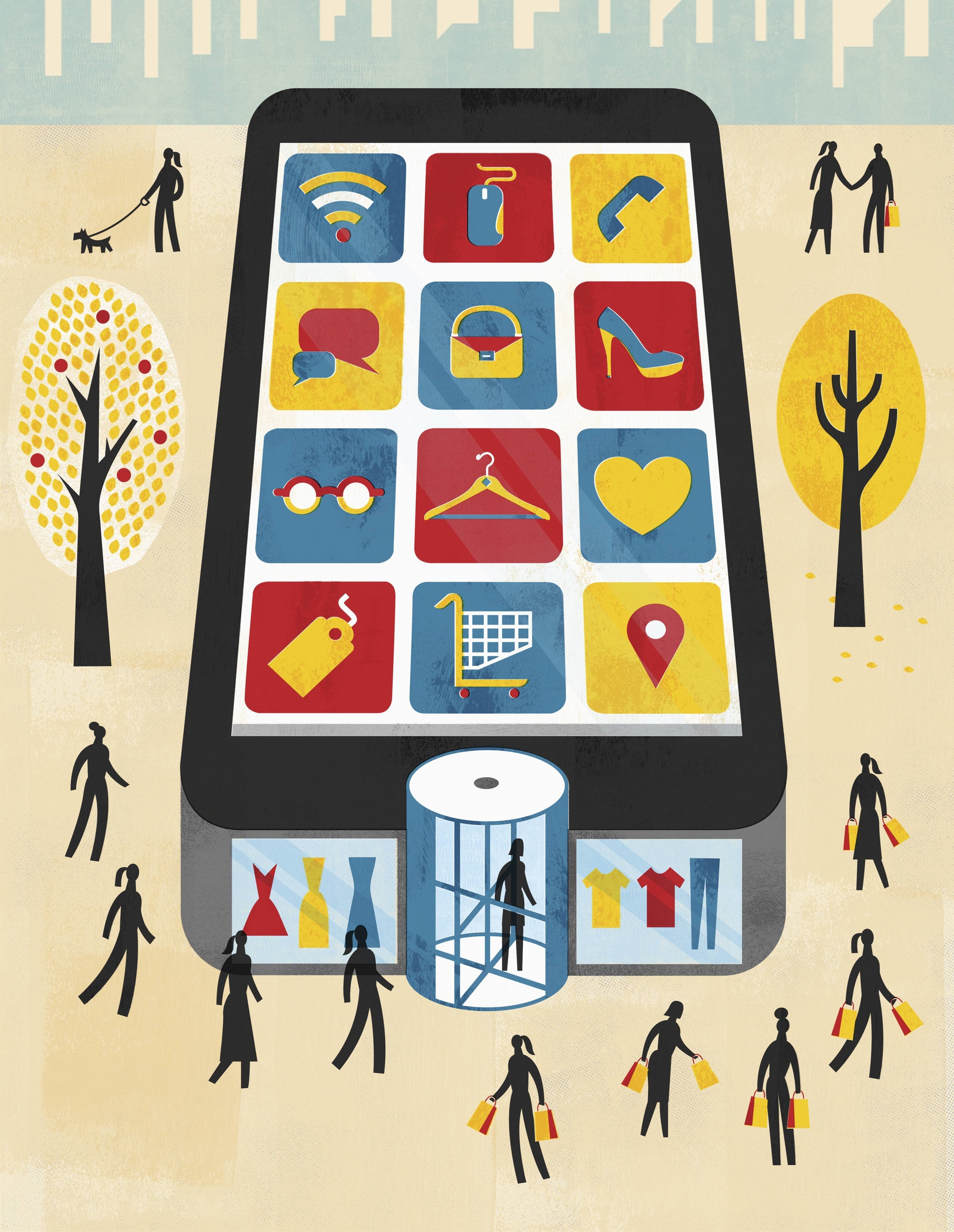 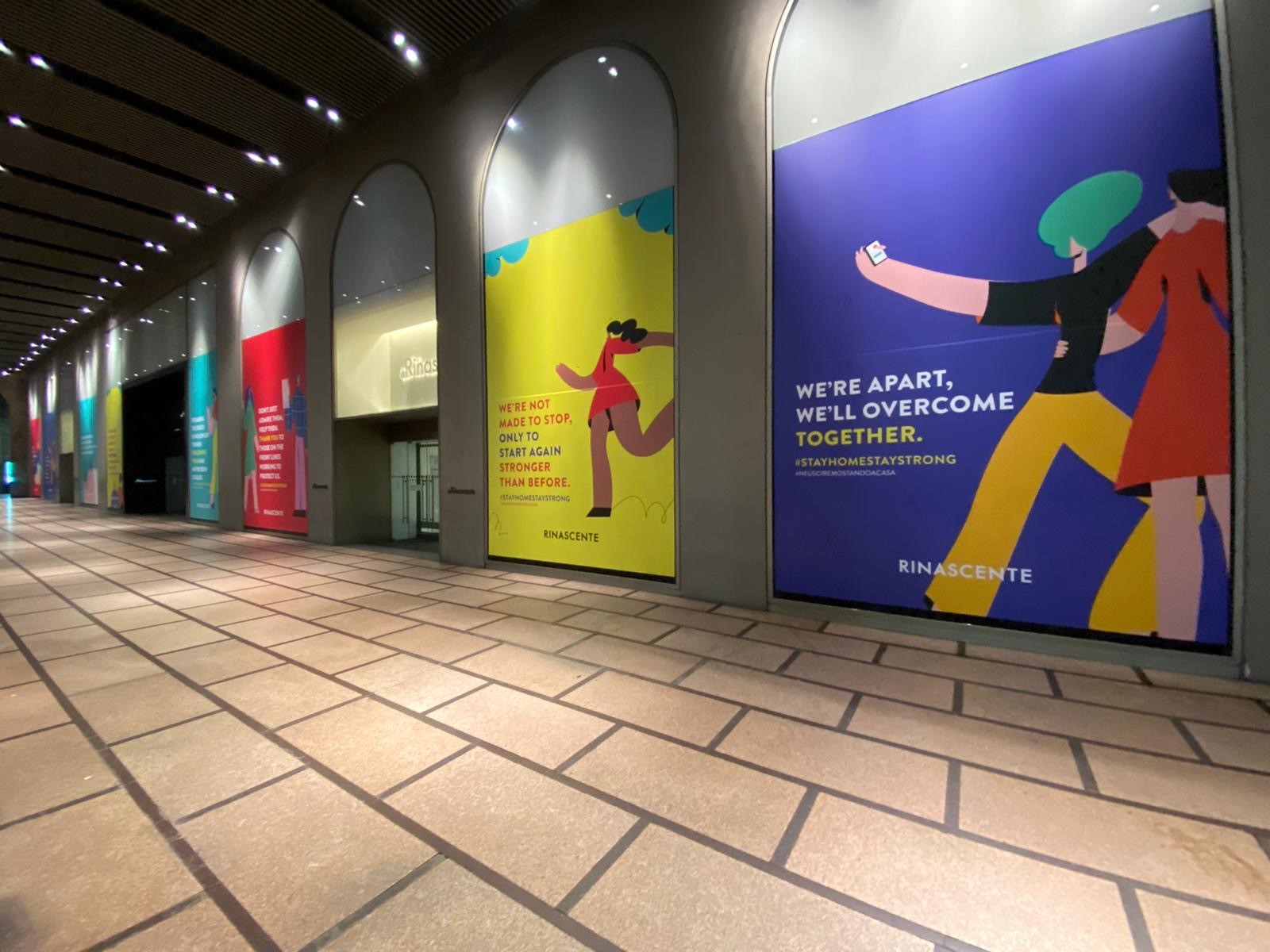