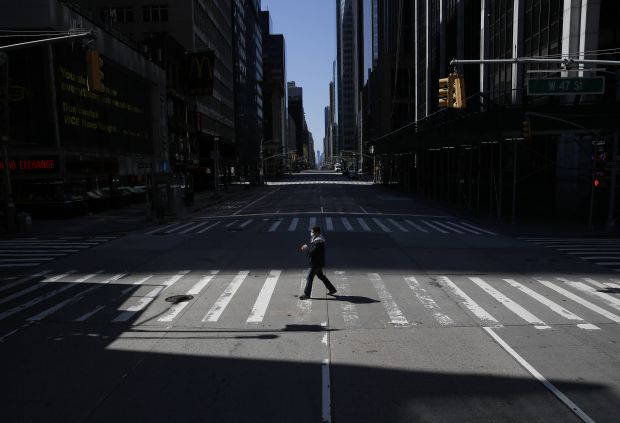 Our New York editor Christopher Blomquist is a true New Yorker, born in the Big Apple and living in the heart of Manhattan. He sent us a very personal letter about how it feels like strolling through the city that never sleeps these days...

"Just like when I was in elementary and junior high school (forgetting high school when I started to get my teenaged rebellion on), I’ve been a good kid–and now, at the age of 54–I’ve strictly been following the principals’ (Governor Cuomo’s and Mayor de Blasio’s) orders to STAY HOME since mid March. But I went out on Monday.

It was the farthest I’ve gone out until the lockdown since I walked to 14th Street, a mere nine blocks south, last week. I used to wander everywhere across this overcrowded sliver of an island of Manhattan and even joined a gym–which I miss so, so very much and I know that by signing up was probably the first sign of the apocalypse because that was just so damned unlike me to do so in the first place. But I had to get to Midtown East on Monday due to a dental emergency.

Wimpy and neurotic as ever, and also in desperate need of exercise, I opted to forgo the “dangerous” subway and walked the 40 blocks north. I chose Fifth Avenue as my path. 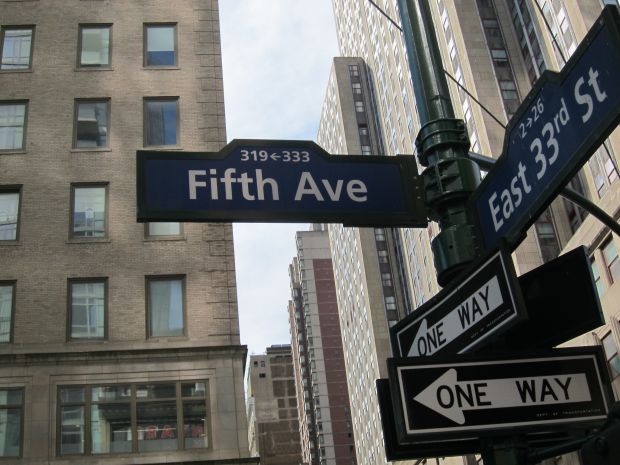 Photo: SI Team
Fifth Avenue sign
Fifth Avenue. It was retail’s poshest address back when. (And the resurgence of Lower Fifth Avenue below 23rd Street in the 1990s pre-NoMad days was a kind of a short-lived thing). Well, dammit, on Monday upper Fifth Avenue was the East Coast version of the Grand Canyon.
Each and every store was closed, many of which I never even realized had opened because even pre-corona because I never ventured up there that often. There’s a new Guess, Adidas and Nike store. Not to mention the permanently shuttered Lord & Taylor flagship…. (And the promised “opening in Fall 2020” new Ugg store now probably has to re-evaluate that date.)
Yet ever-elegant Saks Fifth Ave. looked like a tough-as-nails matriarch, flying her numerous American flags, right next door to St. Patrick’s Cathedral and across from the now inaccessible Rockefeller Center. (But all those American flags were far too many blocks close to Trump Tower to my liberal taste.) 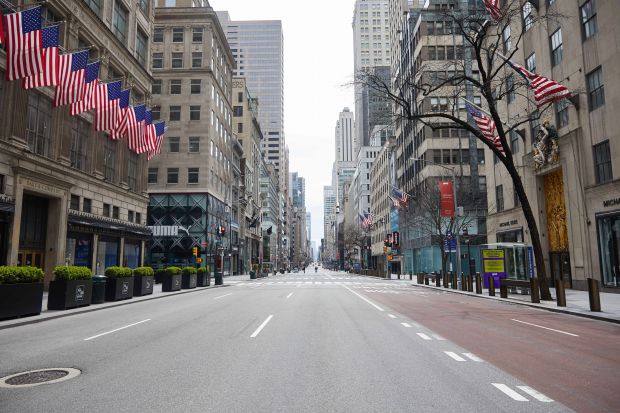 Photo: Imago Images / Zuma Wire
Ghost town: Manhattan's 5th Avenue with famous department store Saks Fifth Avenue (left)
And, yes, even Trump Tower was closed. I smirked–underneath my “recommended” mask–but then thought about the businesses and their employees inside who can’t work and are not earning an income. And I suddenly wanted to cry. 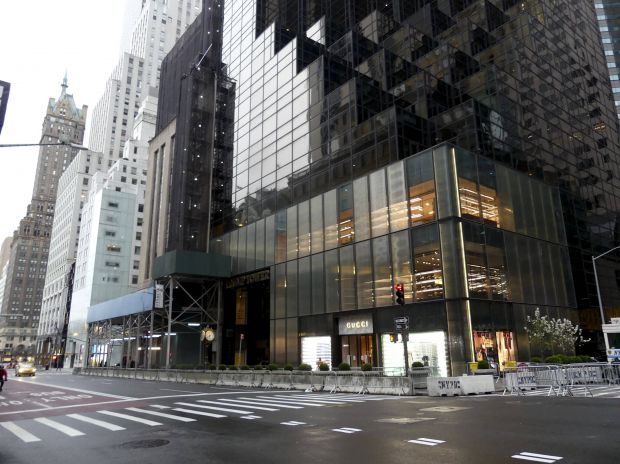 Photo: Imago Images / Zuma Wire
The Trump Tower is closed because of the coronavirus pandemic
But I’m a (supposedly) tough New Yorker and quickly, self-centeredly realized that doing so would only fog up my already fogged up eyeglass lenses whilst wearing a facemask even more.

So I didn’t cry. I just continued to trek to the dentist’s.

And after my anointed appointment I walked back home…. To my 120-residential apartment building where I suspect at least 30% of the residents have decamped elsewhere. And from where I should stop bitching and definitely stop self-pitying. Because, in fact, I’ve got it really good compared to most.

Manhattan–and thus me too–is indeed rather maniacal and extra-emotional these days. And it’s quite disconcerting. 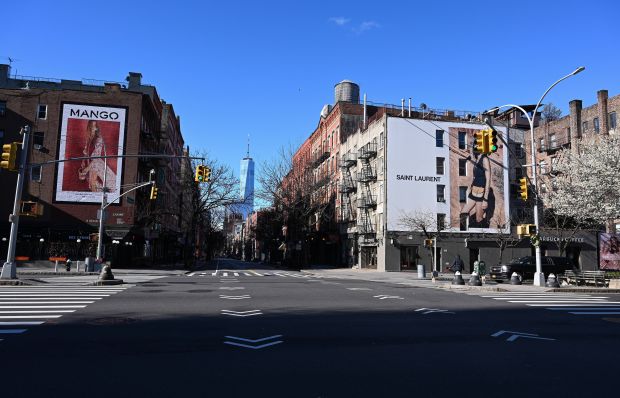 Photo: Imago Images / Zuma Wire
New York empty streets during coronavirus pandemic, Manhattan, Laffayette St, Broadway
But, yeah, I’m (generally and gratefully) good. And I suspect this magical island is as well. At least I hope it is.

Still, I wonder how the fashion world–especially here in NYC, its national epicenter–will recover. It has always been accused as being superfluous and I have argued against that for years but I don’t honestly foresee people buying clothes again. Or caring about what they look like all gussied up. Even egotistical New Yorkers.

Because, at least for me, all I want to do is hug him/her/they again and in some specific cases I would very much like to do that without clothes on. But, concerning my immediate family and friends–whom I have not seen physically in months–let’s just wear tees and jeans–or shorts since it’ll be the summer–and embrace. No fashion judgment. (This was always the case with me but especially now and forever.)

That said, please let’s all hang in through this and wear whatever the hell we want to in the end/the new beginning. To paraphrase the brilliant Diana Vreeland… Why don’t you…. put on what makes you the most comfortable and optimistic?

Because no matter what brand you’re donning, you’re still gonna look great to me when I see you again. J

Much love (and even more-so-than-usual personal neuroses and cheap sentiment) from me in NYC, the unfortunate mega-center of this c*** of a virus, 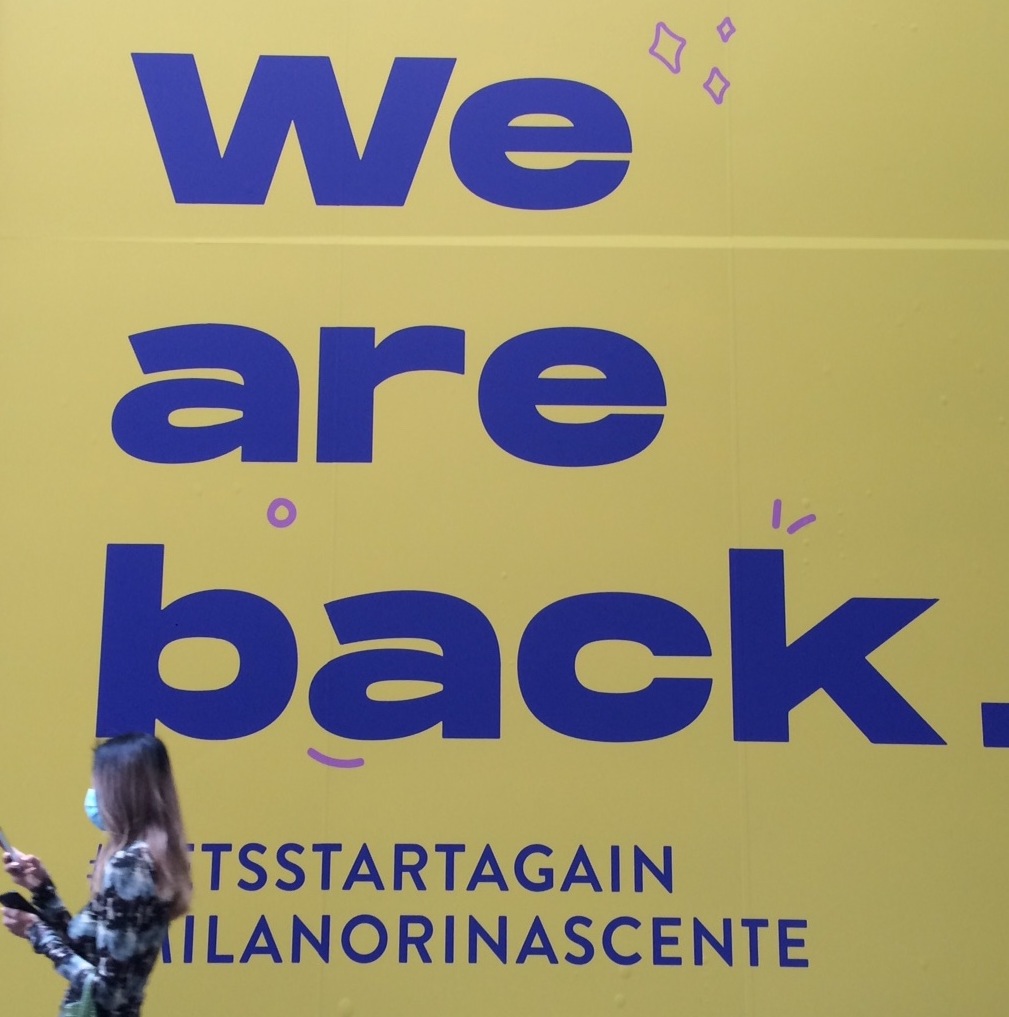 How Italy is heading for a new norm 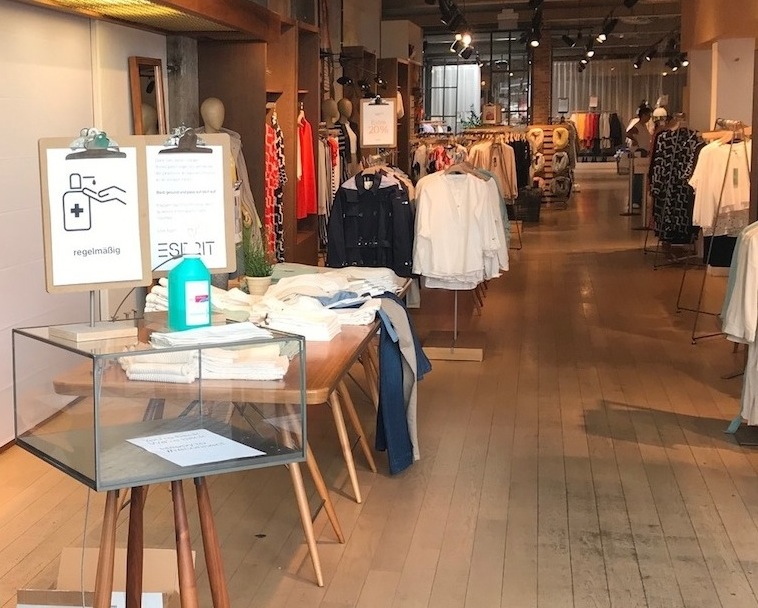