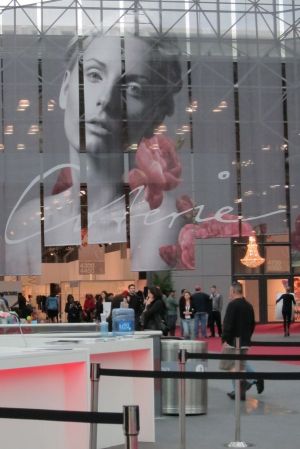 by Christopher Blomquist — September 19, 2014
The annual September women’s market concluded earlier this week in New York City. Here are reports from three of the most important trade shows that took place during it.

Coterie
Returning to the Javits Center for a three-day run, ENK’s Coterie show and its sister footwear event Sole Commerce once again served as the largest showcase of brands for women’s market. Special areas included TMRW, a showcase of 60 up-and-coming contemporary brands such as Skingraft, Whit and Rodebjer, and French Rebellion, a new marketplace with 18 brands from Paris such as Rad Hourani and Shamaz. In addition to fashion collections and contemporary, accessories, bridge and eveningwear were also featured.

Major denim brands such as Hudson, AG, Agave and Paige returned as did the new denim brand Greywire. Its founder, Michael Press said, “I feel like this show is happening in 2005—that’s how good business has been for us at it.” Other exhibitors, however, reported steady to slow traffic.

Vero Moda and sister denim brand Noisy May, both of Europe’s Bestseller Group, said they strong sales and a great reaction in this, their first season selling in the United States. Unless previous editions, there was not a dedicated denim area and jeans brands were dispersed throughout the show floors.

Trendwise, destroyed and repaired denim in mostly light washes dominated at Coterie, especially at Greywire, Kensie and Mavi. Jogger jeans and jackets made from the same knit material were bestsellers at Mavi according to its brand rep. Elsewhere, Harlyn showed its signature prints in pretty feminine silhouettes while graphic T-shirt line Chrldr offered tees with amusing sayings and a fun wineglass-print hoodie.

A collection of sustainable organic denim imported from Japan was shown by Rosel, alongside the brand’s bundle of hand woven knit accessories (Made in the USA). Silky ready to wear styles were trimmed with knit at the Italian brand WLG. Open stitched mesh tops, embellished with laser cut appliqués, were chillingly cool at the Zero Degrees Celsius booth. A trend of tribal stitched accessories was seen throughout the show. The artisan handmade bag designs at Bluma Project from Peru were offered in backpacks, carryalls and travel pillows. Different from the structured style cap, Mature Ha is deconstructed style of the classic box hat imported from Japan and made its New York debut.

Co-producer Ed Mandelbaum discussed the show’s changing assortment. 'We used to carry about 90% of American brands,” he explained. “Now we offer 55% American and 45% of our brands are from Europe, Japan, Italy and France.