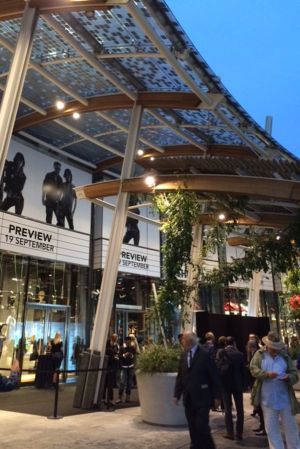 The new concept store selling the Replay, We Are Replay and Replay & Sons brands, is the result of a partnership with Roman and Williams Buildings and Interiors, a design studio specialized in creating movie sceneries and luxury hotellerie interiors just debuting in the fashion scene.

“Our Replay The Stage store is developed in order to recreate a movie set, equipment and back-of-house departments that together embody the filmmaking process because we feel that every customer is important to us and, while entering our store, he has to feel like an actor at the center of the stage,” commented Matteo Sinigaglia, owner of Replay.

The whole project revolves around the cinema/theatre concept. Indeed the structure is being developed as a real stage, where there are no fixed structures, but as in a cinema plot, everything changes and is expected to evolve.

The store is characterized by rough-polished concrete floors, industrial design elements and grids of film lights hanging from the blackened out ceiling. The backs of ‘flats’ all around contain various stage sets: a humble Midwestern house with vintage wallpaper, an abandoned American barn, at once sun-cracked and aged in the desert but mysteriously full of jeans, a proper 1928 Manhattan tailor shop somehow transported to Milan.

Each set is created with the aim to convey an element of surprise – the tornado is actually a swirling kaleidoscope of brass butterflies; the barn includes framed window views out across a desert landscape to a scenic painted sunset. On the reverse, the Tailor Shop offers a service of customization for special edition denims of the Red Seal made-to-measure premium denim collection to be customized with leather tags, buttons and rivets according to each visitors’ taste. Average price for this jeans will be about €300. Moreover other special items will be also available in the future.

At the center of the space, visitors can ascend a large, open, industrial steel staircase from where a hanging carousel displays a moving series of jeans. The upper floor of the store will host an area that in part will work as a shop and in part as a restaurant welcoming about 140 people and expected to open in November 2014.

Four other similar concept stores are expected to open worldwide. A new one will open in 2015 in New York, where Replay is keen to expand soon. Two more are expected in the future in Asia and in another European fashion capital. “Each of these stores will be different from the other, though all of them will be experience stores, where, though, some design elements might repeat,” comments Sinigaglia. “We are also considering the possibility to recreate a reduced size version of this concept for eventual future smaller openings.”

Replay expects to close 2014 registering €230 million (they registered €204 million in 2013), 87% of whose are from export. Northern Europe still represents the brand’s major market and expects to reach higher growth in Asia, especially in Korea where, they recently signed an agreement to open 10 monobrand stores by end 2015 in partnership with Lotte group. The company is now distributed in 50 countries worldwide and sold through a wholesale distribution network of 3,000 sales points and 220 monobrand stores (expected to become 240 by 2016).