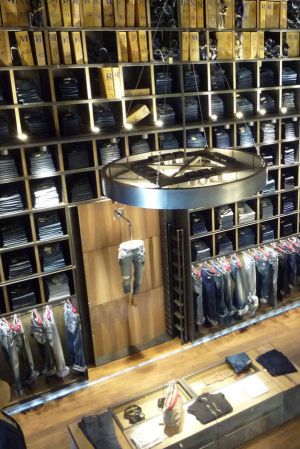 by Maria Cristina Pavarini — December 14, 2012
Fashion Box, owner of the Replay, Replay&Sons, We Are Replay and Red Seal brands is further investing in its international markets, signing two new distirbution agreements within the Middle East and Russia.

The Italian company will work with Fitra, a company of the Chalhoub Group, for managing the distribution of Replay in Arab Emirates, Bahrain, Saudi Arabia, Kuwait, Qatar, Syria Giordania and Iran from S/S 2013. 13 new Replay monobrand stores are planned to be opened by 2017 on top of the five extant Fashion Box stores in Saudi Arabia, which are now owned by Fitra. In addition to this, it is expected that Replay products will soon be available through department stores in the Middle East.

A new agreement involving the Replay, We Are Replay and Replay & Sons brands was signed with The Denim Star Project company regarding distribution to Russia, Kazakhstan, Ucraina, Armenia, Bielorussia, Kirgikistan, Tagikistan, Turkmenistan and Uzbekistan.

The agreement will last three years with the option to renovate it for two more years. This means that by end 2015, 18 monobrand stores will open in those areas. Today Fashion Box has already opened five mono brand stores in Russia in Moscow, Krasnodar, Rostov On Don, Novorossiysk and Sochi and three shops-in-the-shop in Ukraine with a monobrand in Odessa. The aim is to open 27 monobrand stores by 2015.

The Chaloub Group was founded by the Michel Chalhoub family in 1955 and is reknown as a major player in the luxury market in the Middle East. The group specializes in retail and distribution of renowned brands that produce beauty, fashion and gift items.

The Denim Star Project is one of most important distribution groups of Italian casual and denim brands in the Russian market. It was founded in Moscow in 1996 and manages a distribution network of 250 wholesale stores and 60 retail stores. Their showroom is based in the historic centre of Moscow city.

Fashion Box sells worldwide to Middle East, Asia, America and Africa to a total of 50 countries. Its wholesale network distribution counts on about 3,000 stores and 200 monobrand stores. Its yearly turnover is €227 milllion, 85% of which comes from export.