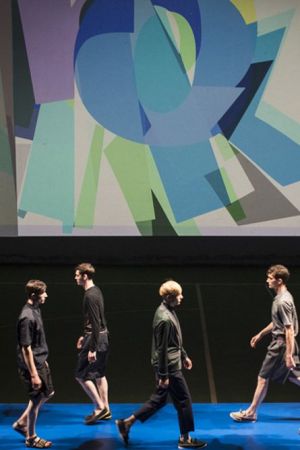 by Maria Cristina Pavarini — June 24, 2013
The most recent editions of Pitti Uomo and Pitti W (held in Florence's Fortezza da Basso from June 18-21, 2013) recorded a total of 30,000 visitors out of which more than 18,100 were buyers. This resembles an increase in attendants, especially from foreign countries. Comparing the results to the previous year, it was noticed that Italian visitor numbers have remained stable, while the attendance of foreign visitors (from over 100 countries) has grown by + 4.5%. Most visitors came from Germany and Japan (at about the same levels of 2012). A strong visitor increase was registered from Russia, USA, China, Korea, Turkey and Hong Kong.

A significant increase has also been registered from South East Asian countries such as Singapore, Taiwan, Malaysia, and Central Asia (Kazakstahn, Azerbaijan and others) and the Middle East (Emirates and Saudi Arabia). Significant growth also came from Indian visitors.
In Europe slight losses came from France, UK, Spain and The Netherlands, though significant growth came from Switzerland, Belgium, Portugal and Northern Europe (Denmark and Norway). In addition, Ukraine, Poland, the Czech Republic and Romania registered an increase. Good results also came from Mexico, Columbia, Australia and Morocco. The show's atmosphere was lively and crowded, despite the very hot weather and the difficulties the market is facing.

A clear sign of the difficult economic situation stood out at once since Pitti W, the show's section dedicated to womenswear previews, was hosted inside the Fortezza and no longer at the external pavillion location, Dogana. 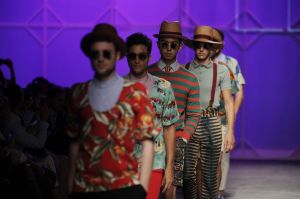 Show by Stella Jean
Pitti Vrooms ahead
Colors, prints and lively sportswear are trending this year as is a renewed attention to jeanswear. Also popular is motorcycling and the whole energetic vibe around speed, consistent to Pitti's headline for its S/S 2014 previews: 'Vroom Pitti Vroom'. The show presented different artistic sculptures made from old pieces of motorcycles and emblems made of reflective motorcycling patches. It also hosted vintage motorbike leather perfectos and presented groups of model motorcyclists moving though the pavilion areas on special vintage motorbikes. 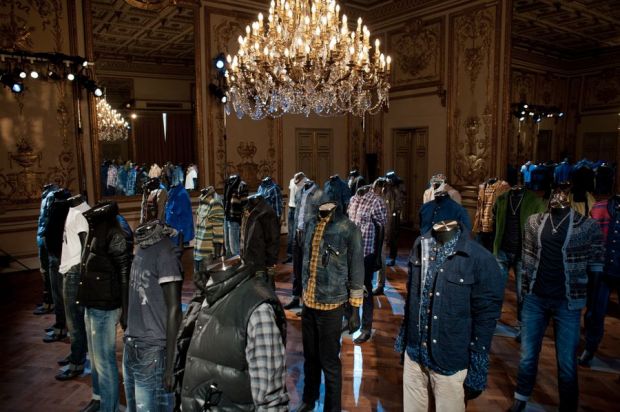 Denim forever
All companies continue to bet on denim - including formal apparel companies - since this product category seems to suffer less than other ones. US premium brand PRPS chose to debut in Florence, Italy, with an exhibition/installation of iconic and historical jean models that celebrate the brand's 10th anniversary. The company aims to reach 250 top retailers in Italy by selling the PRPS Goods and Co., PRPS Japan and PRPS Noir collections. Levi's Made & Crafted and Levi's Vintage took their inspiration from archive pieces such as rodeo-shirts and surfer's items, colorful tops and knits. Gas opted for a series of very elaborate shades of blues and blue/green denims, in addition to a series of tops characterised by reinterpreted maritime prints. Meltin' Pot presented its new jeanswear collection that is focused on its own iconic yellow triangle design as well as offering a series of 3D-constructed denim items by Orta Anadolu which utilise Vintech/Dual Core technology. Meltin' Pot also proposed their iconic reversible jeans B-side. The pattern is based on the historical Rifle 58 pattern that is inspired by the biker world.

Roy Rogers presented a selection of women's products made with Japanese fabrics and denims as well as men's items that combine the sportswear attitude with sophisticated menswear such as a cotton checked windbreakers with inner jersey lining. President's, an upmarket collection also produced by Seven Bell group, just as Roy Rogers, offers highly researched menswear and jeanswear all made in Italy paying great attention to garment construction and detailing, using only Italian fabrics and Japanese red selvedge denims. President also presented a special selection of bags made with Tuscan leather and Japanese denims produced in collaboration with The Superior Labor. They also launched a selection of 10 wooden handmade skateboards produced in collaboration with a typical Italian specialist.
Edwin presented a selection of jeanswear made entirely with Japanese denims as well as a special selection of knitwear pieces created in collaboration with Italian knitwear specialist Jupiter. (+) People also continues producing its own denim and total look product collection by always focusing on man-made garment construction as well as by launching a new selection of men's shoes that employ both denim and handpainted leather.
The attitude that characterised denim also influenced outerwear apparel. Woolrich has just presented the "Aged to Perfection" special capsule collection aimed to be sold to a few upmarket stores, including 14 oz. in Berlin and DMC in Zurich. This special selection of parkas was treated according to similar finishes employed for jeans. This way items have an irregular aged look. "Our aim is to constantly recall clients through special ideas and capsule collections," commented Andrea Cané, Creative Director, WP Lavori in Corso. "For this we devised this new product offer in collaboration with Alessandro Viganò, expert denim insider." 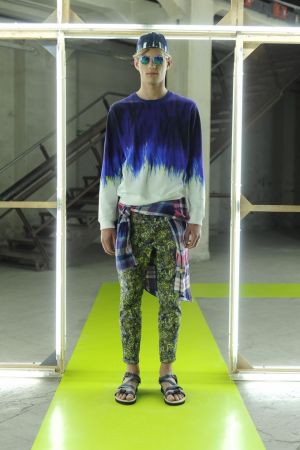 Outfit by MSGM
Bright colors and lively prints are characteristic of the S/S 2014 season. MSGM, the upcoming designer selected among the Pitti Italics designers, showed a mix of patterns according to a surf and skater attitude. Stella Jean, launching her first men's collection, opted for macro colorful printed patterns, bermuda shorts and wide shirts.

Many companies employed printed or jacquard cotton fabrics and jerseys inside out in order to show more delicate shades as an alternative to widespread prints. Prints were another element that characterised the show. Kolor, Men's Special Guest Designer at Pitti, added floral applications to the edges of many men's outfits.
Macro checks and contrasting color panels as well as carefully constructed women's fashion characterised the collection of Damir Doma, Woman's Guest Designer of Pitti W.

Run, baby, run
The real must for footwear this season is running sneakers. Both technical sneakers or simply those inspired by this highly practised sport are the protagonists of this show, and its the more colorful and lively the better. Among some examples focusing on this theme were, to name a few: Lacoste Footwear, Onitsuka Tiger, New Balance, Lotto Leggenda and Diadora. Pirelli also launched its new sneaker P-Zero, which is characterised by clashing color contrasts. 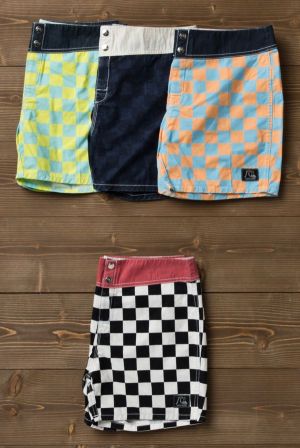 The Quicksilver Original Boardshorts
Surf's Up
Surf is a key theme for the season and can be seen in many prints and colors. The show hosted Jeff Hakman, surf champion and founder of the brand Quiksilver, who launched the QOB (Quiksilver Original Boardshort), a selection of boardshorts redesigned and reinterpreted with modern materials that resemble the authentic boardshorts worn by US surfers in the 1960s.