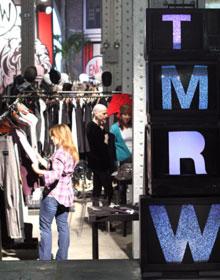 — January 28, 2010
The three major menswear trade shows that concluded in New York last week had one thing in common: each featured a new format and/or location. And, judging from exhibitor and visitor feedback, the changed served them all well.

The most radically rethought show, ENK NYC (formerly The Collective/Blue), debuted with its new name and look at a new venue, The Tunnel/La Venue in Chelsea. (The show’s previous incarnation had traditionally been held at the Show Piers on Manhattan’s West Side.) Running Jan. 17-19 and produced by trade show powerhouse ENK International, the show mirrored the feel of its intimate Las Vegas counterpart, the still young ENK Las Vegas show, but seemed even more inviting than its Nevada-based sibling thanks to the site’s wood floors and brick walls that instantly lent a more elegant and Old World feel. ENK NYC was split into four sections: Designers’ Collective (classic sportswear that was in the same vein of what used to show at The Collective), Blue (denim and advanced sportswear), Clean (which encompassed the four men’s grooming brands of Histories de Parfums, The New York Shaving Company, Sharps Barber and Shop and Taylor of Old Bond Street) and Tomorrow, which featured a dozen up-and-coming labels such as Rodger, Wrath Arcane and Company of We. With approximately 110 exhibitors in total, the scaled-down show pampered guests and exhibitors with cater waitresses and waiters passing out gourmet snacks and cocktails. Exhibitor Vince Gonzales, owner of Vince Gonzales Inc., which reps the Johnson Motors brand, among others, said that orders at the ENK NYC far surpassed his initial projections.

Project NY, the once highly denim-driven show started by Atrium boutique retailer Sam Ben-Avraham as an alternative to The Collective in The Aughts (and now owned by MAGIC’s producer Advanstar) also debuted a venue change and held its first show at the bright and open loft space of 82 Mercer Street in SoHo. Running Jan. 18-20 and with just under 100 booths, the show was clearly a tighter, leaner version of its prior self (or, that said, perhaps a return to its roots). While the space felt a tad cramped, there was no denying that it was busy. Brands such as Plain Jane Homme and Threads for Thought reported brisk and robust business at the event.

The Capsule show, produced by PR and sales agency BPMW, doubled its exhibitor list from 75 by expanding into two shuttled-connected venues, its traditional home, The Angel Orsensanz Center on the Lower East Side, and its new one, The Puck Building. Given roomier spaces, its exhibitors seemed to flourish. First-time exhibitor Stolen Girlfriends Club, a New Zealand–based brand, was one of many to sing the realigned show’s praises. “It has been fantastic. We’ve actually turned some stores away,” said Don Gosling, a cofounder of the brand.

Trendwise, the NYC men’s shows’ exhibitors were not keen on a look that will radicalize fashion. Dark denim, the color Kelly green and rustic woodsmen-like plaid again dominated the collections on display at the fall shows.