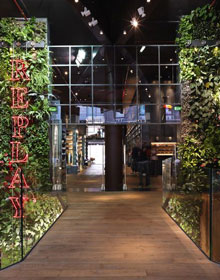 — April 19, 2010
Italy’s Fashion Box has outlined plans for a relaunch of Replay, the Italian jeanswear company, following its acquisition by Equibox.

“Our aim is to close 2010 maintaining the same turnover of 2009 (€272 million) and start growing from 2011,” Matteo Sinigaglia, the new CEO and co-founder of Fashion Box said. “We want to do it by remaining faithful to the company’s own DNA, to its products’ identity, to its founder’s original spirit and to all of its collaborators – which haven’t changed,” he said.

The timely announcement follows rumors of some 100 job cuts. Contrary to the rumors, the company will not be cutting any jobs. Sinigaglia said instead he plans to further expand the company’s reach, beginning in the Far East with countries such as China, Japan and Korea. Specifically, it wants to open about 30 monobrand stores in China within the next several years, following an existing joint-venture. In addition, it still is planning to open a store in Miami in the coming months. “This way we can ‘taste’ the US market and build our strategy also there,” he said.

To push the company’s heritage in the meantime, Replay recently launched a new premium jeans capsule collection that should become a compact total-look collection for men called Replay Red Seal and for women Replay White Seal, set to bow in S/S 11.