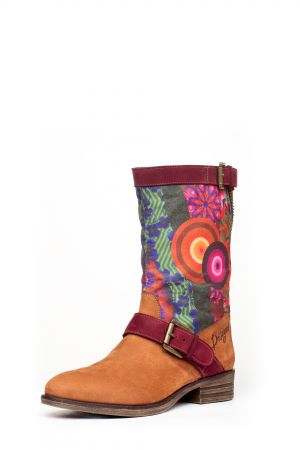 Quiet start for The Micam

by Maria Cristina Pavarini — March 06, 2013
The first days of The Micam, the Italian footwear fair held in Rho Pero, Milan, between 3rd and 6th March 2013, have been quiet. The show has been mostly visited by foreign footwear insiders. The show is hosting 1,538 exhibitors (38 less than a year ago), of which 961 are Italian and the rest come from 28 countries. The show occupies a 68,000 square meter area (consistent with last year). According to its organisers the show will host 36,000 visitors, half of which are foreign visitors coming mainly from Russia, China, South Korea, Emirates and The US.

Opulence is a main element that is characterised by highly decorated shoes and boots with high heels, golden embroideries, metallic and jewel like applications. Most outstanding materials employed are velvet, satin, pony-fur and astrakhan - either in black and browns as well as in colourful materials such as cognac, burgundy and bottle green -  as seen at Ballin, Pretty Ballerinas (also offering their new selection Pretty Loafers focused on a light-changing). Malì Parmi debuted with a new line of accessories, including velvet and varnish shoe and boot selection. Rodolphe Menudier offers a series of boots decorated with different sized buckles, pointed studs, and rivets.

Loafers and slippers are another must-have almost every company has included. Most offer different variations on materials, as well as with different applications such as golden embroideries, studs and crystals. Despite this most companies continue to focus on boots - at knee or ankle, moccasins, sneakers and - of course - decollates.

Sneakers continue to be a must - better if aged, dyed and washed. White contrasting rubber soles, high-ankles as seen at Harmont&Blaine or metallic coated or sequin covered as seen at Stonefly. This brand has also launched a new woman's comfy & cool high-heel shoe Second Skin. Voile Blanche opted for a series of high-heel sneakers made with nylon, leather and suede mixes.

Eco-friendly continues to be a must, as are lively colours. Lumberjack has presented its new River Natural boot selection whose soles are made with recycled rubber remains. El Naturalista continues pursuing the same aim by offering a wider selection of shoes made with recycled rubber soles while opting for uppers made with brighter colours such as blues, greens and reds. It is also offering a new selection of knitwear pieces and accessories as well as bags made with leather and knitwear. Desigual also continues offering a selection of embroidered and coloured shoes employing different applications and embroideries. Contrasts of grey and orange are some of its most impactful ideas. Portguese brand Storksteps have made footwear that employs a special gel made from cork that helps shock absorption and guarantee maximum comfort to high-heel sporty shoes and boots.