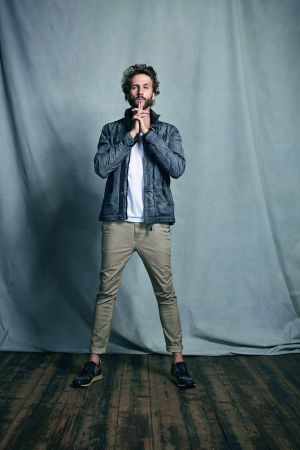 Look from the collection
Stories

— September 16, 2014
Rupam Bhattacharya has been Khujo's new head of men’s design since February 2014. The upcoming SS’15 Kuhjo collection is the first line he designed for the brand. We met up with him for a short interview to talk about the collection and his take on menswear. Interview by Juliette Nguyen

What did you do before working for Khujo?
I worked as a designer/buyer for a well-known French brand called Kaporal since its beginning, almost 10 years ago. Later on I developed two new brands called Joe Retro and Vargas for the Kaporal group.

What has changed now?
For me, the country and the working methods have changed.  Moreover, it´s exciting to take up another challenge and to build up something new and successful, from scratch.

The menswear section has become much bigger, can you explain why?
The idea was to build a real and complete men´s wear collection around the jackets, which remain the core item of Khujo.

How many pieces are now in the menswear collection?
Excluding the jackets, there are now more than 120 styles in a broad spectrum of colors.

Can you describe the style of the ss15 collection?
It´s a casual, everyday collection designed for urban men, who like to be well-dressed. This could be for work, for partying or just for going for a stroll. The range of clothing can suit men of all age groups and from all walks of life.

Where does the inspiration come from?
The collection consists of four themes: In spring we present downtown New York inspired indigo casuals and a rugged vintage look that reminds of highway hipsters travelling across America. Then in summer we go for bright & playful lines that have a Miami feel to them, until we welcome autumn with the dark American grunge-rock.

What is the biggest difference to the former menswear collection?
It´s a complete collection, with all categories of garments, that incorporates the jackets perfectly to create an urban and trendy “story”.