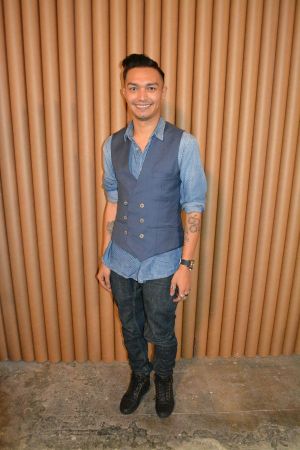 Jonathan Christopher at Denim by PV in Barcelona
Stories

— November 28, 2014
Just a few weeks ago, Jonathan Christopher won the Global Denim Awards competition, which took place during denim trade show Kingpins in Amsterdam. We met him at Denim by Première Vision in Barcelona in order to talk about his work with ITV Denim and his professional future after winning the competition. Interview by Lorenzo Molina

How did you end up participating in the Global Denim Awards in Amsterdam?
HTNK, a fashion recruitment and consulting company in Holland, called me while I was on holiday in Italy and asked if I would like to join the Global Denim Awards competition. They already had a supplier -ITV Denim- and I was able to participate since one of the criteria for designers was that you must not have worked with denim. I accepted the challenge and moved immediately to the other side of Italy to meet ITV’s facilities and team and create a collection in just four weeks. After visiting the factory and getting to know the fabrics, I also experienced sustainable practices like the coloring process of denim - not with indigo but with a waste material from wine.  That’s something that I applied for the collection.

Was it a challenge for you to work on a complete denim collection?
It was! But it gave me also a new insight of what denim is of a material. Usually, if you’re not a denim designer you don’t get in touch with denim. For me, it was such an eye-opener to see how denim can change any way you want it to be. From a designer’s point of view, the washing process was even more inspirational than doing the sketches and designs.

How does the future look like after winning the competition?
I have a few projects going on. I can’t tell a lot about them right now because they’re in a young stage. I’m actually going to make a new collection including a lot of denim, a lot of this material that I fell in love with!