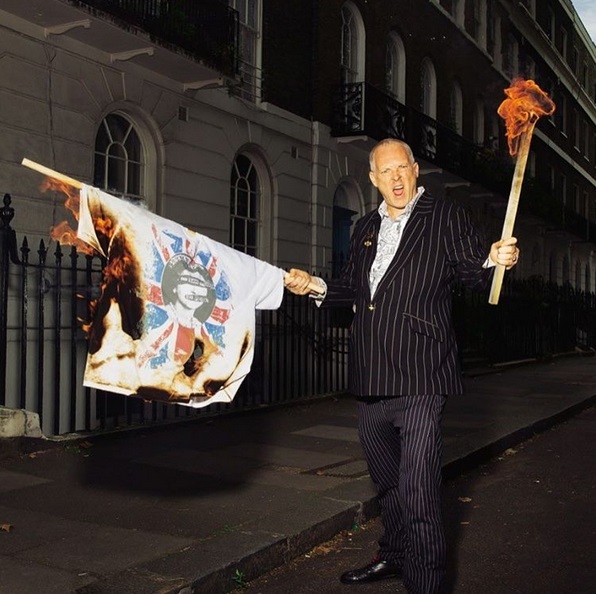 On Saturday, the release of the Sex Pistols single ‘Anarchy in the UK’ will be celebrating its 40th anniversary. A date –November 26, 1976– considered by many the birth of the punk movement. But Joe Corré, son of punk-instigators iconic designer Vivienne Westwood and musician Malcolm McLaren –who was the agent of the Sex Pistols–, is honoring the day in a very unconventional way: burning punk memorabilia from his personal miscellany valued at £5m (€5.9 million) and inviting others to do the same.

In order to raise awareness about the event and the reasoning behind, Corré created a dedicated blog called Burn Punk London, where he harshly criticizes how the punk movement has become part of the establishment’s culture that the same movement aimed to overthrow and which sparkled its birth. For example, he has been incensed by seeing the Queen give her official blessing for 2016 as ‘the year of punk’.

Only the punk aesthetics and related products remain in the fashion scene, but little is known today about the social disruptive element of punk, especially among the younger generations. “If Punk is now so firmly a part of British cultural tourism and all that’s left of it is a pose, then it is conformist and we ought to treat it like beefeaters,” Corré writes in his crusade-blog. “There are parallels to be drawn between the no future generation of the 1970’s and todays. Our environment is being destroyed at a rate of knots, Fracking our land! TTIP! London is suffering social cleansing […] What I am doing is highlighting the hypocrisy at the core of this hijacking of 40 years of Anarchy in the UK and it’s why I am inviting him to light the match on November 26th at Buckingham Palace.”

Burn Punk London also has an Instagram account with over 2.600 followers. Below you’ll find the very first post, where Corré explains the reasoning behind his action. You can follow the action on Saturday via live stream by subscribing here.

Joe Corré co-founded the lingerie brand Agent Provocateur, but he “hasn’t had any involvement with that company for years and finds it now completely boring,” according to a recent post on his blog.