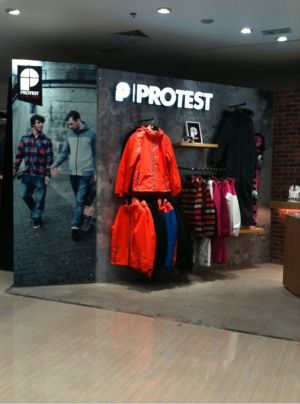 by Anastasia Dyakovskaya — November 28, 2012
Dutch boardwear brand Protest has set its sights on China. With two new store openings in Beijing last year, the label now has plans to launch in Tianjin, which ranks among China’s top five populated cities with 10 million residents.

Located at the La Vita Shopping Center on the city’s main shopping street, the new store models after its European versions while keeping in mind the needs of the Chinese market. Protests’ Commericial Director Hans van Breukelen stated: “We need to create retail awareness for the brand to rapidly develop Protest into China. Not just because of the production and development interest Protest has there, but because of the fast growing population and retail spending power of more than 1.3 billion people.”

BTS Shanghai International, which has served as Protest’s partner since the fall of 2010, will ensure the brand’s ability to make its mark on the Chinese market. Breukelen explained: “BTS is highly experienced in retail, wholesale, marketing and production and we are delighted to be adding that expertise to boost our brand in the Asian market. It will be interesting to see how it develops as the European sports market moves toward a ʻfunctionalʼ side of the business while China’s full brand lifestyle awareness provides consumer relevance all year round.”