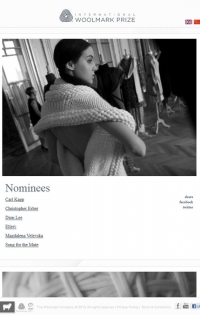 Designer's full collections will be unveiled at the International Woolmark Prize awards show to be held at the recently renovated ME Hotel in The Strand.

“The International Woolmark Prize has gained extraordinary momentum over the past twelve months generating support and interest across the globe,” explained Stuart McCullough, CEO of Australian Wool Innovation, owners of The Woolmark Company. “The final event in February will showcase the future of fashion and we are very proud that Merino wool will hold a firm place in that exciting and prosperous future."