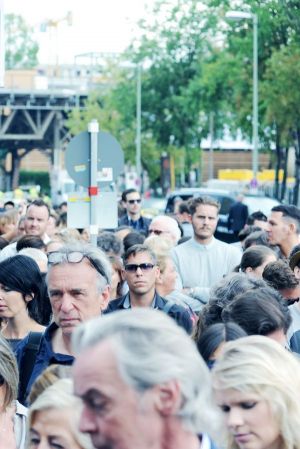 Visitors lining up in front of Premium in July '14
Stories

by Juliette Tafreschi, Lorenzo Molina and Maria Hunstig — January 15, 2015
One thing about the upcoming Berlin trade show days is for sure: things will be different this season. There won’t be a Bread & Butter in Tempelhof nor a Capsule at Postbahnhof and their former exhibitors have numerously wandered to alternative shows. Seek has moved, Premium and Panorama have added space, four shows have introduced a joint ticketing (Bright, Premium, Seek and Show & Order) and all shows have agreed on the new routine from Monday-Wednesday. In the end, something else comes out quite clearly: things will be interesting in Berlin next week.


Here’s the news you need to know on Bright, Panorama, Premium, Seek, Show & Order, Greenshowroom/Ethical Fashion Show and Bread & Butter’s Back to the Streets spin-off - all arranged in alphabetical order. 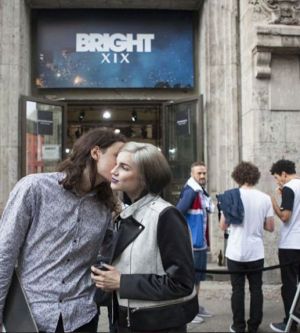 At Bright in July '14
For the third time now, Bright will once again find its home at ‘Kaufhaus Jandorf’ in Berlin’s Mitte district. Around 300 street- and sportswear collections will be presented on the three floors of the  former department store. Bright welcomes a number of new entries, amongst these well-known names from the segment such as  Asics, Carhartt, Xlarge, Undefeated, Staple, Cheapo, Gumball 3000 or Globe.
A number of side events will accompany the trade show, including product and video launch parties by Emerica, Carhartt, Converse and Obey. On Tuesday (January 20), Bright will for the fourth time host the Bright European Skateboard awards and hand out prices in 11 categories (Skateboarder/Shop/Video/Brand of the year, amongst others) at Neue Heimat in Friedrichshain. Following the ceremony, there will be a House of Vans after-party.


Bread & Butter – Back to the Streets 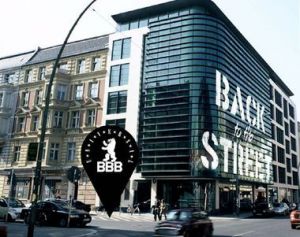 
The event will take place in the offices of Bread & Butter at Münzstraße 13, in Berlin-Mitte and the adjacent complex The Blue Yard (total of 2,000 sqm). According to Bread & Butter, around 40 brands will be exhibiting their collections like Cinque, Drykorn, Denham, CG - Club of Gents, Freitag, Herrlicher and K.O.I.. Bread & Butter will provide furnishing like clothes racks, tables, chairs and benches for the brands. A get-together is planned for Tuesday evening (January 20) at the courtyard of The Blue Yard area.


Karl-Heinz Müller: "I am very happy to have like-minded people with extracts of their collection on board and to invite them to our 'home'.”

Hakan Temür, CEO Brandpool: “Since the Nudie repair shop is located at The Blue Yard area, we are of course taking part at the event. When the biggest and coolest tradeshow fails this means that everybody should think about what that exactly means for the whole industry in general.” Nudie Jeans and K.O.I are also presenting their collections at the Seek tradeshow.
Also other exhibitors support Karl-Heinz Müller and his concept. Tristan Bolwin, brand manager Cinque: “We have benefited from the tradeshow in the past and we also believe that there will be a strong platform in the future. We like the loft and industrial charm of the location and even it is not easy to predict how many visitors are coming, Berlin-Mitte is usually very well frequented. In the end we have to move away from vainness and believe in a collective platform.”
Erwin O. Licher from denim brand Herrlicher: “We just want to spend some nice days with good friends.”
Jürgen Putzer, Club of Gents: “We can’t say if the Back to the Streets concept evolves to a serious tradeshow platform but we are sure that the event will attract a lot of attention among press and buyers. Good ideas always take some time to prevail. We have to give Karl-Heinz Müller some time.”
Mavi, which also planned to take part in Bread & Butter – Back to the Streets decided to cancel its participation as the company announced yesterday (January 13). 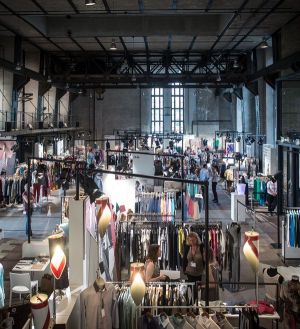 Ethical Fashion Show in July '14
For the very first time, both Greenshowroom and the Ethical Fashion Show will be held under the same roof: the Postbahnhof building, close to the Ostbahnhof train station (former home of Capsule's Berlin edition). According to Messe Frankfurt, the shows’ organizer, this allows to take advantage of synergies.

The participating eco-fashion labels will be spread around the 3,000 square meters of exhibition space at Postbahnhof. More than 160 brands have registered for this upcoming edition, representing a growth of ca. 40 labels compared to the previous event in July 2014. Among the newcomers to the Greenshowroom are: Amazona Secrets, Grain de Brune, Linda Mai Phung, Nine to five and Deepmello, among others. The Ethical Fashion Show will welcome brands such as Skunkfunk, Ramnation, Up-Rise and Langerchen and Mandala.

Selected brands will introduce the highlights of their FW2015 collections during the salon show on January 20 at 3:30pm.
There will also be a showcase in charge of the online platform GreenroomVoice, which gives an overview on the topic ‘ethically sourced’. An extensive seminar program will provide useful information about themes like fair trade or sustainable supply chain management.
Finally, the official opening of the trade shows counts on the participation of the German minister for economic cooperation and development Dr. Gerd Müller. 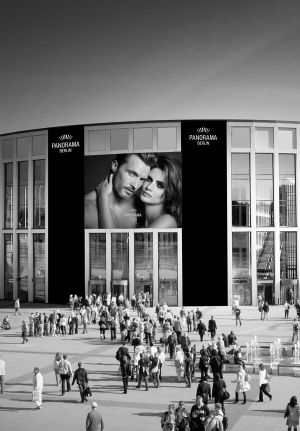 Panorama imagery
Fashion trade show Panorama has benefited from the seesaw of Bread & Butter. Big former Bread & Butter exhibitors like Mustang, PME Legend, Khujo and Camel Active have moved to Panorama. The exhibition space at Messe Berlin has now been extended by 4,000 sqm. The new area is called ‘Urban Up’ and will host around 40 brands including Dreimaster, Solid, Hummel, Tailored & Originals, Lindbergh, Shine, Goodyear, Humör and Nümph. It will be located on the first floor above the regular nine Panorama halls and will be integrated in the area between hall 1 and 3.

The series of lectures (in hall 7C) has been extended with lectures about sustainability and e-commerce. On January 20, there will be a trend information given by TextilWirtschaft.


Together with Textiles-Contacts, Panorama Berlin and m2b GmbH are launching a new business portal specifically designed for the fashion industry. The goal is to bring together manufacturers and distributors from the fashion industry. The focus is on helping companies find the right distribution partners in Germany, Austria, Switzerland, the Netherlands, Belgium and Poland. 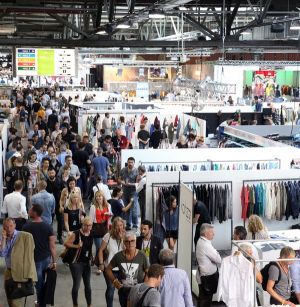 Premium's hall 3 in July '14
Premium has grown and offers several novelties: for the upcoming edition, the trade show stretches over nearly 27,000 sqm on its usual grounds at Station-Berlin, showcasing around 1,000 brands and 1,800 collections from 28 countries, 25% of which are new entries.
The newly created hall 8, an extension of the space, will house new luxury and pre-collections by labels such as Antonia Zander, Augustin Teboul, Lala Berlin or Vladimir Karaleev. Moreover, the close-by Kühlhaus, former home of sister trade show Seek, will house more commercial trend fashion brands such as Chasin’, Elvine, Fornarina, FTC Cashmere, Gang, Gas, MbyM, Modström, One Green Elephant or Toms. On Kühlhaus’ ground floor, there will be several retail pop-up shops, amongst others by Jack’s, Kauf dich Glücklich and Dr. Bronners.
In between the new hall 8 (new luxury) and hall 7 (sophisticated womenswear), ‘The Cubes’ will now host accessories (jewelry, bags, scarves and glasses) by labels such as By Boe, Chaingang, House of Holland, Le Specs or Tom Shot.

Additionally, Premium will be introducing a new conference in cooperation with Seek. On January 20, the #Fashiontech summit will broach the latest developments from the fields of wearable devices and the (digital) future of fashion on the Seek grounds at Glaushaus Arena Berlin. Speakers include representatives from Adidas, AEG and Wired. 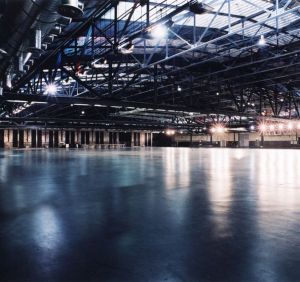 Seek's new location Arena
Hosting approximately 220 brands from the upper streetwear segment, Seek will run its largest edition so far this January. At its new location, Arena Berlin, a network of former warehouses on the banks of the River Spree in Kreuzberg, modern menswear collections will be rounded up by a selection of womenswear, shoes, accessories and lifestyle goods on a total surface of 6,000 sq m, divided into the three areas Arena, Arena Club and Glashaus. At its former location Kühlhaus, in direct neighborhood to sister trade show Premium, Seek has been occupying a space of only 2,500 sq m.
“For Seek it is time to take the next step. Seek has reached a popularity and relevance which allows to move to an own location. The industrial, historic charm will be continued – stone floors, glass blocks. We combine that with the raw wood of the boxes. There is a continuum from Kühlhaus to Arena: we make it cozy and familiar,” says Seek’s sales director Maren Wiebus.
Oliver Saunders, creative director of Seek, called the show’s new layout a “modern day department store”, offering more brands and styles for a “more diverse group of buyers”.
Amongst the brands are Seek regulars such as Billionaire Boys Club, Boxfresh, Dr. Martens, Farah, Universal Works, Stutterheim or YMC but also a lot of big new entries like Alpha Industries, Ben Sherman, Carhartt WIP, Edwin, Fred Perry, Herschel Supply Co., Kings Of Indigo, Levi’s Made & Crafted, Levi’s Vintage Clothing, New Balance or Nudie Jeans, many of whom have exhibited at Bread & Butter in the past. 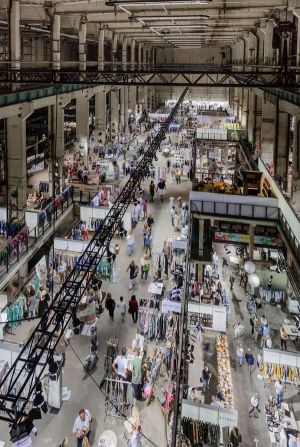 Show & Order in July '14
The seventh edition of Show&Order will take place at the former power station Kraftwerk, with a surface of more than 10,000 square meters. Over 250 international brands have registered this time with more than 100 new exhibitors. Among the newcomers are Anine Bing (US), Speedway Clothing (UK), Ragdoll Los Angeles (US), Ravn (Denmark), Didier Ludot La Petite Robe Noire (France), Bosideng (Italy) and La Petite Robe di Chiara Boni (Italy). In addition, an area called ‘The Future’ has been installed especially for younger labels where brands like Ostblock Design (Germany), Ron Abraham (France), les D’arcs (Germany) will be showing their work. Across the trade show, so-called Trend Islands by international stylist Mads Roennborg will present outfits created with products of the exhibitors’ collections.

On Tuesday (January 20), Show & Order once again invites for a Late Night Order until 9 pm. From 6 pm that night, the showgrounds will be visited by well-known guests such as football player Christoph Metzelder, the artist Carsten Sander and the culture secretary of the state Berlin Tim Renner.