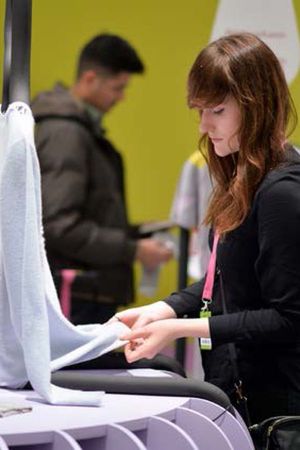 by Maria Cristina Pavarini — February 15, 2016
The upcoming edition of Premiere Vision, the textile and accessory collective show taking place in Paris, Parc de Expositions from 16 to 18 February, 2016, will host 1.720 exhibitors, 4% less than in February 2015 when 1,793 companies participated in the show.

“The total number of exhibitors is down slightly,” admitted Gilles Lasbordes, general manager of Premiere Vision. “This aspect reflects the trend of the market, but the dynamic of the offer remains strong. For this edition we host 142 new exhibiting companies, versus the 128 ones of February 2015. In addition, the show occupies an equivalent space as last year.” Despite market difficulties, Lasbordes recognizes that the show’s strength is not weakened: “Both indicators show the renewed confidence of our exhibitors in the PV group of fairs. And from an economic point of view we see activities including groupings of companies, mergers and buyouts but also shutdowns and repositioning - all developments that have had a significant impact on some of our exhibitors, in particular on the smallest and therefore most fragile players.”

Premiere Vision will host spinners, weavers, accessory makers, design studios, tanners and garment manufacturers presenting novelties for s/s 2017 from 52 countries. Six complementary business sectors will be hosted under the same roof. The show will occupy about 5,500 sq. meters and expects to recall more than 60,000 visitors, out of whose 74% are from foreign countries.

Among novelties of the show there will be the Smart Creation Premiere Vision talk taking place on 17 February, 2016, at 2.30pm. Participating in the event will be Carlo Sorrenti from the Tod’s Group, Alfonso Saibene of Canepa Group, Andrès Franco of P&G Europe Fabric Care and Chantal Malingrey of Premiere Vision. The talk will be moderated by sustainable fashion expert Giusy Bettoni.

Also new will be an initiative started for celebrating the 35th anniversary of Leclarieur, renowned Paris concept store. Leclarieur involved 15 designers to reinterpret a key item in their men's collection, the Shigoto jacket. All the redesigned models inspired by this Japanese work jackets will be presented inside this show’s edition and from March they will be sold as part of a limited edition collection inside the store.