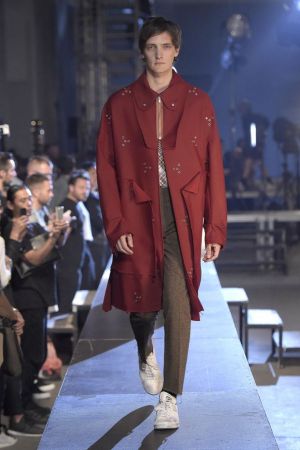 by Lorenzo Molina — April 15, 2016
Pitti Uomo is warming up the engines for this year’s upcoming installment (June 14 through 17) and just announced “Florence Calling: Raf Simons,” an event celebrating the Belgian designer’s contemporary fashion and his return to Florence. Simons will introduce the spring/summer 2017 collection as well as a special project being developed for Pitti – no further details are currently available.

“Florence holds a special place in my heart as, over the years, I have regularly come back to show my work or to collaborate on ventures that closely mirrored my thoughts about it,” said Raf Simons.

“We are both happy and proud that Raf Simons is coming back to Florence,” said Lapo Cianchi, Pitti Immagine director of communications and events. “He has been a leading figure in some of the best events we have produced during Pitti Immagine Uomo over the years, such as the “Il Quarto Sesso. Il territorio estremo dell’adolescenza” exhibition (2003), which he co-curated with Francesco Bonami; the fashion show, video installation and book produced to celebrate the tenth anniversary of his brand (2005); and the Jil Sander runway show (2010), for which he was the creative director. We like to believe that Raf Simons considers Florence the ideal context and opportunity for taking stock of his professional and personal projects, and the place to find the energy and inspiration for future endeavors.”
“There is also an even more powerful emotional element, a very personal note,” concludes Cianchi, “I believe that Raf Simons, like no other person in fashion, is able to grasp the restless spirit of youth, its lights and sounds, along with a nostalgia for youth, which is a vital and positive acceptance of maturity. And this is why he succeeds so well in presenting the myth of youth in new forms and ways.”