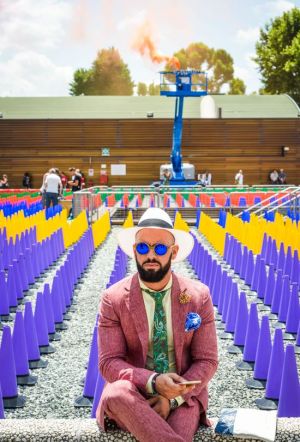 Visitor in front of the Pitticolor installation
Stories

by Maria Cristina Pavarini — June 18, 2015
The first days of Pitti Uomo, which kicked off on 16 June in Florence, were positive and full of energy.

Although Tuesday 16 had already been a busy show day, on Wednesday 17, even more visitors were counted, filling the halls and corridors with a lively and crowded atmosphere. Exhibitors were also highly satisfied about the attendance.

A significant presence of international visitors was also sensed. By visiting the second edition of Born In the USA, the show presenting US brands organized together with Liberty fairs, their 24 exhibitors noticed that about 40 percent of their visitors were foreigners, most of them from upmarket stores. Among new exhibitors there were grooming brands, such as Ernest Supplies and Blind Barber, as well as the highly appreciated new entry The Hill Side.

A strong return of motobiking trend reinvented for the down jacket and outer apparel segment was also presented by various brands. Colmar, for instance, opted for some lightweight down jackets built as motobike leather pieces with asymmetric zippers in total black, in addition to ever present colorful down jackets that were presented by almost every brand for this season. Bomboogie reinvented and transformed the leather perfecto pattern into lightweight spring jackets made with a series of material mixes.

Other companies, traditionally identified with the menswear segment, debuted in women’s apparel. North Sails, newly acquired and revamped, presented a totally repositioned upmarket collection and launched a new fashion-minded woman’s line. Baracuta, mostly identified with men’s outer jackets, launched a complete new selection of about 20 jackets characterized by more feminine fits and a careful study of material such as super soft, lightweight stretch leather and suede in addition to a selection of new pastel hues. 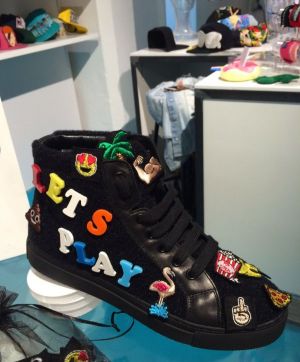 Customizeable sneakers by Richkids
Great attention was also devoted to eco-minded jeans as presented, for instance, by Compagnia del Denim’s upmarket brand Memory’s. They launched a capsule collection in collaboration with chef Bruno Barbieri made with ecofibers such as hemp, cotton, linen and other natural fibers, all dyed with spices and other hues of natural origin.

Among the newest accessories lines the coolest ones were Richkids, a line of bracelets and sneakers covered with Velcro that can be personalized with detachable letters, logos and elements. Also cool were sneakers by Wize & Hope that carry LED light elements all around their soles.