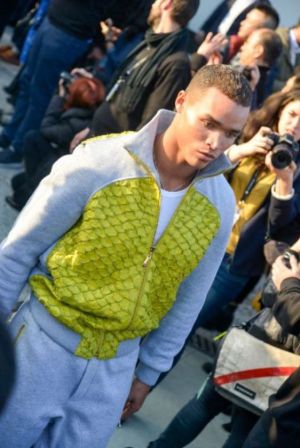 by Maria Cristina Pavarini — January 14, 2015
On the first day of Pitti Uomo, which opened its doors yesterday, January 13, most exhibitors reported a usual amount of visitors - at least in comparison to the last seasons’ first day, normally a day mostly crowded with insiders, agents and press, rather than key and international buyers, who usually come to Florence starting with the second day.

After the recent cancellation of Bread & Butter (B&B) in Tempelhof, Berlin, different opinions dominated amongst the exhibitors, though most of them reported that they had already decided to leave the Berlin trade show before Karl-Heinz Mueller officially announced his cancellation.
Raffaello Napoleone, CEO, Pitti Uomo, said: "The cancellation of Bread& Butter happened when exhibitors for this January edition of Pitti had already been set and decided. From our side, we noticed that entrepreneurs had already decided on their new strategies and where to exhibit before, also regarding the steps taken by the Berlin show during in the last seasons. Now we have to see what will happen in terms of visitor numbers from certain areas such as Germany and Northern Europe. Let's wait and see what will happen in these days." 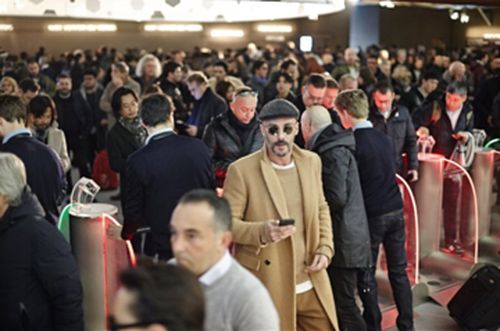 “Life goes on and one has to look ahead,” commented Sauro Mariani, marketing manager, Antony Morato. “Nobody speaks about B&B being cancelled, but people take their decisions and look for alternatives. We had already decided to focus on Pitti Uomo when we saw these frequent changes of strategy.”
Enzo Fusco, owner FGF Industry, reacted similarly: “There were already signs showing that things were not going fine. Pitti is a good alternative. Generally speaking I see more people around and they all seem optimistic. Though let's wait and see what happens in the next days,” he explained, referring to the fact that the show often welcomes more international and top clients from the second day on.

Andrea Belletti, owner Interjeans Group (distributor of brands such as Superdry and Nudie Jeans in Italy), is more critical: “Considering that the weather is nice, no snow or ice is around and no strikes are happening, traffic should have been much higher. Instead it seems in line with usual levels.” According to Massimiliano Alvisi, sales manager, also from Interjeans Group, the quality of buyers is higher and people emit great optimism. 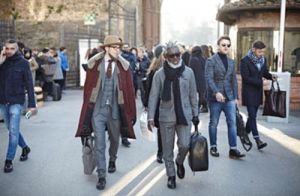 Visitors at Pitti Uomo yesterday
Other exhibitors commented that taking part in a show requires investments of about €200,000-250,000. But participating in Pitti Uomo is still important since it kicks off the season.
According to Andrea Cané, creative director, WP Work in progress: “I think that participating in a show has to be an opportunity not only for meeting clients and entertain them - because most shows are simply PR occasions -, but also for sharing problems and trying to find common solutions. I'm sure that Karl-Heinz’ next show will focus on offering such opportunities to both visitors and exhibitors.”