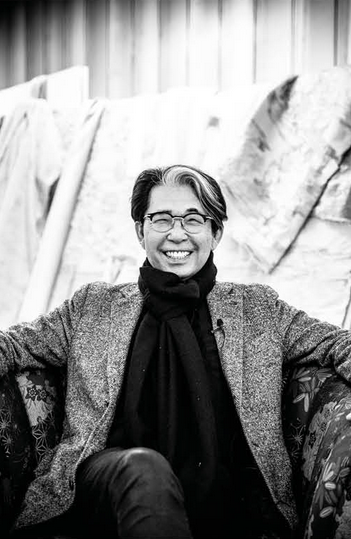 by Tobias Bayer — October 05, 2020
Kenzo Takada died at the age of 81 years from the consequences of the coronavirus. The Japanese designer influenced French ready-to-wear with his mix of the traditions of his home country and the spirit of metropolises like New York. And added a touch of poetic lightness and relaxed optimism to fashion.

Bernard Arnault, CEO of the world's largest luxury group LVMH, which now owns the Kenzo brand, paid tribute to the Japanese in an obituary for his "fresh, spontaneous spirit": "Since the 1970s, Kenzo has missed out on fashion with a pinch of poetic lightness and a lovely casualness that has inspired many designers after him".

Kenzo Takada was a globetrotter and bridge-builder between the Orient and Occident. In his designs he combined the traditions of his homeland with the style of western metropolises such as New York and Paris. He shaped trends in the 70s and 80s. He used symbols of nature and gave the flower power aesthetic its own twist, for example with jungle prints.

In the 70s, Kenzo's ingenuity gave the nickname "idea man" to the French ready-to-wear industry. He was inspired by folk and national costumes and preferred tunics and tunics over wide skirts or tight pants. Characteristic for him were large flower patterns and unusual color compositions. Kenzo was an eclectic talent who thought beyond the boundaries of fashion. He designed costumes for the play "Course du Temps" by Karlheinz Stockhausen and directed the film "Rêve après rêve" in 1980.

Kenzo was "an emblematic personality" of the fashion industry for half a century, said Sylvie Colin, the brand's current CEO: "He enriched the world with his creativity and color. His optimism, love of life and generosity remain the cornerstones of the fashion house".

Kenzo was born in Hyogo Prefecture, northwest of Osaka. He was the fifth of seven children. After becoming the first male student at the Bunka Gakuen Fashion School in Tokyo, he moved to Paris in 1965. There he attended the shows of Pierre Cardin, Chanel and Christian Dior. He began working with the Féraud fashion house and the magazine Jardin des Modes. In 1970 he was the first Japanese designer to present a ready-to-wear collection, which quickly caused a furore.

The Japanese was also a busy entrepreneur. In 1970, he opened the "Jungle Jap" store in the Galérie Vivienne. In the following years he expanded with stores around the globe. There Kenzo sold men's and women's fashion, children's fashion, jeans, accessories, home articles, fragrances and writing materials. The Kenzo company was managed by Francois Beaufumé until it was sold to LVMH in 1993.

After the takeover, Kenzo remained creative director for the time being. On his 65th birthday, he announced his intention to withdraw from fashion. This happened after his last show as creative director on October 7, 1999.

He was followed by designers like Antonio Marras, Gilles Rosier, Roy Krejberg and Christophe Blondin. In the years since 2011, Humberto Leon and Carol Lim have been able to ignite a real hype around the brand. The brains behind the Opening Ceremony stores took the distinctive tiger head out of the brand's archives, positioned it prominently on sweatshirts, for example, and thus brought the brand to new commercial success. The spring collection 2020 was the last of the design duo's collections for the Kenzo brand. Felipe Oliveira Baptista is currently creative director. He praised Kenzo for his "incredible energy, his warmth and his stirring talent": "His spirit lives on.

Kenzo Takada's most recent project was the creation of the interior design brand K-3 together with his long-time partners Jonathan Bouchet Manheim and Engelbert Honorat this January.
Jonathan Bouchet Manheim, CEO, K-3: “Kenzo Takada was incredibly creative; with a stroke of genius, he imagined a new artistic and colourful story combining East and West – his native Japan and his life in Paris. I had the chance to work alongside him for many years, always in awe, admiring his curiosity and open-mindedness. He seemed quiet and shy at first, but he was full of humour. He was generous and always knew how to look after the people close to his heart. He had a zest for life... Kenzo Takada was the epitome of the art of living.”

(Please note: this article was originally posted on TextilWirtschaft.de. For the German version click here.)