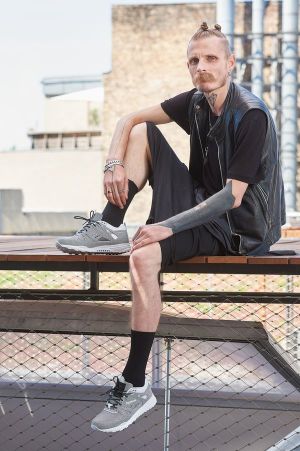 — August 20, 2015
Patrick Mohr might be one of the few German fashion designers who you will actually find (and definitely recognize) on the pages of popular press from time to time. This is partly due to his very distinct looks, usually including a bushy mustache, a set of body-concealing, loose-fit clothing and a pair of statement glasses covering his slightly lunatic eye expression, and partly because of his unconventional, taboo-breaking fashion shows. Patrick Mohr has sent homeless, albinos and bodybuilders across his catwalks in the past (even before unconventional, provoking models became somewhat of a trend) but he hasn’t done so for a while.
In recent seasons, Mohr is causing most furors with his footwear collaborations.  Since 2010, the designer is releasing an annual version of his high-top sneaker MK(1-6) with Munich-based Basketball brand K1X (each of them highly sought-after) and starting 2013, Mohr also re-interprets classic sneaker models for Reebok Classics on a  regular basis.
A few weeks ago in Berlin, the Bavaria-raised designer presented his latest work for the sportswear giant: a revamp of Reebok’ Ventilator model from the ‘90s which he rendered a black-and-white look including his signature triangle design. The three unisex models of the Reebok x Patrick Mohr sneaker collection will launch today –exclusively at online retailer Zalando. We spoke to the designer about his new career as a sneaker designer, the struggles of German fashion design and how important it is to receive celebrity support. Interview by Maria Hunstig

Your new Reebok sneakers are sold exclusively at online retailer Zalando which makes them much accessible to a broader mass than your usual limited sneaker editions – also price-wise (a pair retails for €110, your last MK6 sneakers for K1X were more than twice that price). Does that bother you?
The new Reebok Ventilator pack will certainly be worn quite broadly, from students to sneakerheads. I am sure there will be people wearing it who have never heard of me. But I don’t mind that, I think it’s great to make the product accessible to more people and it’s a challenge being limited in the choice of design and material to meet a certain price point. And the collection is still limited! 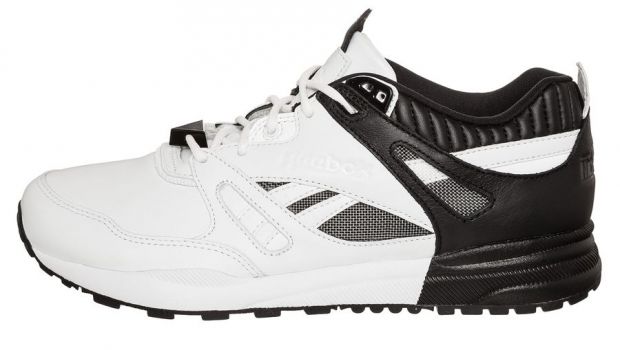 You have formerly been the one roughening up Berlin Fashion Week with a provocative fashion show but in recent times you’ve mainly been making waves with your design and sneaker collaborations. What happened?
I had my first show in 2009 and since then have just always been working and producing. There has never been any money. I never had any expectations but I always believed in myself. Those were hard times, but at some point, around the middle of last year, the penny just dropped.

How did the success come about?
It’s all because of the shoes. At some point people like Chris Brown were directly messaging me on Instagram because they liked my sneaker designs. It’s all about the right seating: Having highly influential people from Lil Wayne to Justin Bieber wearing my kicks really helps.

How did you get inside of the US rap scene?
The rapper Swiss Beatz is my closest mentor. We met when I was doing my first collaboration with Reebok and we liked each other instantly. Then we met again with my agent in Miami and LA and since then, Swiss is really supporting me. That’s so important, without having such people you’ll never be able to unlock that market.  I am also very thankful to Reebok as without them, this wouldn’t have been possible.

What do you think is it that US rappers like about your shoes?
It’s a strong product, its limited and not made by Nike or Adidas – they are looking for something that not everyone has. And the appeal of “Made in Germany” design does play a role, too.

Do you regard yourself as a sneaker designer?
I am a visionary. I am neither a shoe designer nor can I be labelled a “Berlin designer”. I am Patrick. 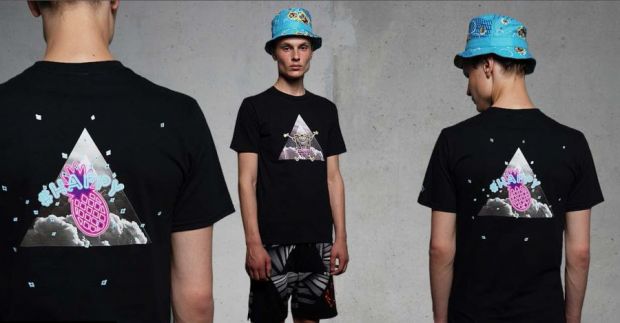 Look from the ‘Patrick Loves SpongeBob by PM' collection

You just debuted a non-footwear collaboration as well. Following names like Pharrell Williams or Moschino, you have just dedicated a full line of apparel and accessories collection to the yellow comic/Nickelodeon hero SpongeBob Squarepants. Tell us about the ‘Patrick Loves SpongeBob by PM” collection.
It’s been an honor getting the license for using the official SpongeBob imagery for my spring/summer ’16 line of shirts, sweaters, trackpants, jackets and accessories. Next to the ready-to-wear collection, we have also produced exclusive caps, bucket hats and socks in cooperation with Starter Black Label which really has been a dream come true to me. We just unveiled the collection during an event at Berlin’s Premium trade show because we are closely connected with Anita (Tillmann, Premium’s CEO) and stand behind what she is doing. Most certainly though, there will be another launch event in the US as well. At the end of the day, I’m not so much interested in the launch event, but in the people wearing the product and the stores carrying it. The collection will hit high profile European and US concept stores like Colette Paris at the beginning of next year.

What’s the problem with fashion design in Germany?
I know people are currently trying to install a Germany Design council, following examples from the UK etc. It’s an ambitious idea but as long as the support is not given, it will not work out as comparable international initiatives. There is just no support for German designers right now – not from the industry, from retail or from the buyers.

After Munich, you are currently based in Berlin. Is the lack of support a reason for you to go abroad?
I could be somewhere completely different in a month. I am not staying around here for long. 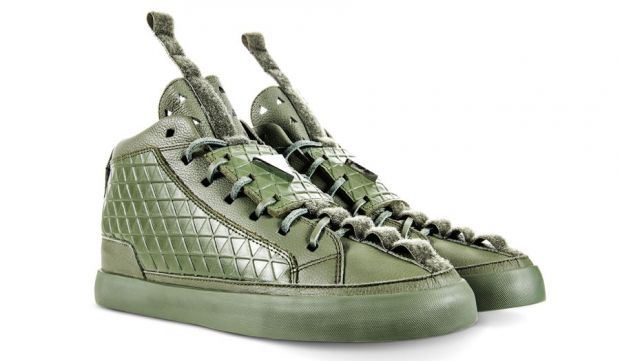