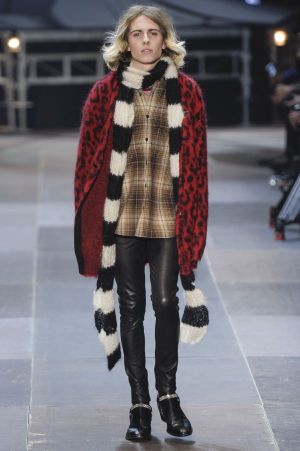 by Barbara Markert — January 25, 2013
Five days, 52 shows on the official schedule and snow flurry: The menswear fashionweek in Paris which continues to grow nearly every season and closed last sunday, was this time quite spectacular because of the stormy and cold weather and also because of some interesting newcomers: Valentino showed the menswear collection for the first time in a show, as same as Carven. Both have been invited before at Pitti Uomo. Hedi Slimane, known as renovator of menswear, presented his first collection as new designer for Saint Laurent.

His debut collection for the luxury house was quite surprising as Slimane showed a very young, hippie new wave and slightly grunge menswear, breaking completely with the traditionel style of the house. But he was not the only one, who took his inspiration from the street. Phillip Lim for his brand 3.1. Phillip Lim was inspired by cafe racer culture and Miharayasuhiro named the anti-establishment, punk movement „Chinpira“ as his main idea for the collection. Transformed in clothes the designers showed effortless shaping, unconventional elegance and skilful use of classical tailoring in a new and very casual way. Besides this the Bauhaus movement and mountain sports were other inpirations cited by the designers. Louis Vuitton and also Hermès showed a quite sporty collection out of luxury materials, Damir Doma and Wooyoungmi combined this with a strong alignment of cuts and silhouettes in the sense of the school of arts in Weimar.

Classical suits were widely abandonned in favour to a more comfortable and oversized styling with trousers out of soft materials, wide cuts or with elastic bunches and jacketts in differing materials as seen by Kris Van Assche, Lanvin, Viktor& Rolf, Dries van Noten, Paul Smith or Maison Martin Margiela. There are two big trends for trousers: extremly wide and long or a three-quarter  lenght, more than a hand over the ankle or even shorter (as seen by Givenchy, Carven, Julien David).

The fashion-trend of mixing materials, already seen in the last seasons, was intensified: Now, even technical fabrics like neoprene or nylon were combined with cashmere, leather or wool qualities (Kolor, Raf Simons, Kris van Assche). As the color range stayed quite restricted in black, gray, navy blue, strong colors were used mainly on tops: like sweater, skirts or jacketts in golden yellow, prune and petrol or as patterned, tight-fitting pull-overs (Raf Simons, Paul Smith. Hermès).

The avant garde designers like Rick Owens, Y. Project by Yohan Serfaty, Boris Bidjan Saberi, Songzio, Juun J. remained true to their style, but softened their outfits with a lot of outerwear jacketts and coats with belts on waistline. Parkas, dufflecoats and classical coats stayed a strong theme for all menswear collections in Paris as also the accessories like bags, scarfs and i-pad cases.