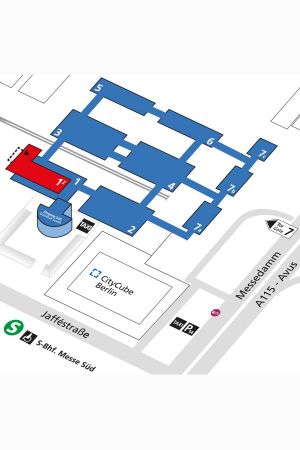 In red: Location of the new Urban Up area
Stories

by Maria Hunstig — December 04, 2014
Berlin’s Panorama trade show has just announced the extension of its exhibition space at Messe Berlin by 4,000 sqm for its January show.

The new area is called ‘Urban Up’ and will host around 40 brands including PME Legend, Dreimaster, Solid, Hummel, Tailored & Originals, Lindbergh, Shine, Goodyear, Humör, Nümph, Smash etc., as was reported by Panorama.
It will be located on the first floor above the regular nine Panorama halls and will be integrated in the area between hall 1 and 3.

“The demand by new exhibitors for additional space forced us to react. These collections are important for the market and relevant for the fashion location Berlin and we are happy to have found a solution. In summer 2015, the areal situation will be more relaxed and there is an option for further expansion and designing new areas for denim and urbanwear as well as a space for progressive menswear”, said Jörg Wichmann, CEO Panorama Berlin.

Several of the brands at Urban Up have been exhibiting at Bread & Butter during its last edition in July. According to SPORTSWEAR INTERNATIONAL’s information, Bread & Butter will not take place in its usual format at Tempelhof Berlin in January. Since trade show boss Karl-Heinz Müller announced that Bread & Butter would be shrunk to one hall on Monday, some of its exhibitors drew back and cancelled their booths. Other brands reported to have received a cancellation by Bread & Butter representatives yesterday.