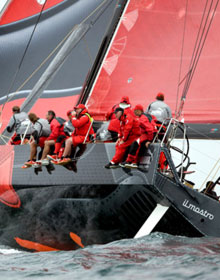 One of eight contestants in the Volvo Ocean Race, the company placed second after Telefonica Black. Overall, contestants spent 143 days at sea and covered over 37,00 nautical miles. The race began in Alicante, Spain in October 2008, with ten legs in all to complete across the globe.

“Puma’s participation in the Volvo Ocean Race was the most innovative marketing campaign the company has ever launched and proved to be an extremely successful starting signal for our sailing category with the investment having been paid more than off,” Jochen Zeitz, Puma Chairman and CEO, said.

He added that sales of the competition’s merchandise, inaugurated via Puma City mobile freestanding structures in Alicante, Boston and St. Petersburg, exceeded expectations.