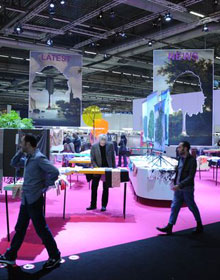 by Maria Cristina Pavarini — July 01, 2010
Premiere Vision, the French textile salon in Paris-Villepinte from September 14-16, has announced several important changes to the show.

The event will be shorter than in previous editions to help keep costs down for companies and will now be three days instead of four.

For the first time, too, the show will host a new area, “L’Atelier Denim,” a space totally dedicated to denim manufacturers. “In this moment almost every fashion brand is offering some denim item in their collection,” said Philippe Pasquet, President Premiere Vision. “As a result, in addition to our first specialized denim show Denim By PV, we are launching this new section aimed at international fashion buyers that visit Premiere Vision to build up and complete  their fashion collections.”

The new section will host 14 denim weavers, among them Bossa, Cappio, Kuroki, Tavex, Uco and Vicunha.

Premiere Vision will also host the second edition of the PV Awards. The show and a jury of top fashion professionals will give out awards for the best five fabrics presented at the show and judged on innovation, performance and the imagination; a special Woolmark prize for innovative wool development will also be handed out. Presiding on the jury will be Costume National’s designer Ennio Capasa. Other jurors include Jane Bong (BCBG MAXAZRIA), Johan Buskvist (Adidas), Tiziana D’Acquisto (Jil Sander), Linda Loppa (Polimoda), Arianna Zuliani (Vivienne Westwood) and Premiere Vision’s Pascaline Wilhelm.