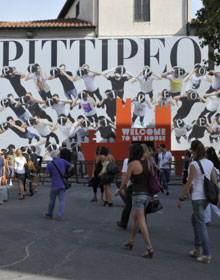 — June 23, 2009
Despite difficult times, Pitti reconfirmed itself as the meeting place for the S/S 2010 season kick-off.

According to first results collected by the trade show’s organizers, the event registered about an 8% drop in visitors with about 8,700 stores represented and over 18,000 buyers, not excepting major ones responsible for volume and setting trends.

“In terms of visitors we should have registered over 30,000 people,” said Raffaello Napoleone, CEO Pitti. “It is a truly good result and I think that everyone agrees with me, even beyond expectations, though there’s still so much to be done, with humbleness, a willingness to consider more and especially working together with our companies sharing common targets.”

The mood inside Florence’s Fortezza da Basso, which hosted the trade show from Jun. 16-19 was positive overall. The general impression was that fewer visitors were around, especially inside the formal apparel pavilions, while most of the young, sportswear and casualwear areas the atmosphere appeared livelier.

The focus for s/s 2010 is primarily on color and the environment. Cycle featured a series of brightly colored jeans in yellow, green, electric blue, turquoise purple, red and coral pink. A new silhouette for jeans are five pockets with ties at the waist and ankles, or zippers at ankles. Sweatshirting material was important and used in blazers, five-pockets and vests. Studs also play an important role.

Gas celebrated its 25th anniversary with a capsule collection of authentic vegetal dye indigo denim items, while Evisu’s new CEO Scott Morrison explained how he wants to reposition the brand. “In the past seasons, the brand offered too many subcollections. This was misleading and dispersive. As a result, we want to reduce the number of Evisu collections. Moreover, we want to go back to pure Japanese styling. Also in terms of the logo, since our seagull backpocket was very visible and probably too loud for the present market moment, we want to offer products with a more discreet logo and branding,” he said.

Many companies are also refocusing their strategies. Dockers’ new European CEO Tomas Schmidt explained that Dockers wants to start working more closely with strategic retailers by offering them a series of concept product groups that include pants and tops, shirts and polos that are now being offered with a stronger emphasis on new fits and outlived aspects.

Lapo Elkann, the creative designer and entrepreneur, presented his holding Italia Independent’s initiatives from a camouflage decorated bus. “By choosing to present our designs in a truck,” he explained, “we wish to communicate that we are in continuous movement, that we never stop, and we are always searching for new destinations”. His new holding comprises a number of projects in fashion, communication, advertising, spirits and alternative energy sources. Out of the numerous partnerships he presented two new tuxedo jackets made with innovative materials such as denim and windproof Gore-Tex, as well as matching handmade hat made in collaboration with Borsalino. He also launched a new series of ski goggles made with Spy Optic and his first Italia Independent monobrand store in St. Tropez, France and expects to open new doors soon, while offering his products to almost 90 of the best stores.

Additional fair events included Pitti People, a gallery of photos taken of the trendiest and most interesting visitors of Pitti. The pictures were taken mostly by blog photographers and hung on walls inside the Fortezza as a homage to its visitors.

Pitti Uomo quietly opened on Jun. 16 with a Mila Schön menswear line launch. The new collection focused its attention on striking color-contrasting total looks and vests. It was presented within the frame of a minimal, though outstanding, modern dance show.

Following the series of main events was the Italian debut of Jun Takahashi’s Undercover with modern men’s looks characterized by essential streetstyle silhouettes and innovative materials.

Replay inaugurated its newly revamped store at a few steps from the Piazza Duomo. The new shop was redesigned according to eco-minded criteria. Not only is it completely covered with wood and hosts a wall where plants are grown, but also designed to conserve energy. The spirit of Replay’s new eco-friendly store reflects a top priority of many fashion companies and a focus for many seasons to come.