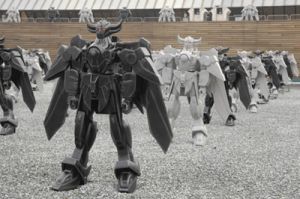 — January 14, 2008
An art display of 100 plastic robots welcomed a large number of visitors to the latest edition of the Pitti Uomo trade show (pittimmagine.com) in Florence’s Fortezza da Basso this past week. The January 2008 edition of Pitti, the international menswear show held January 9 to 12, kicked off the new season in style, and attracted a total of 24,782 visitors, which was less than the January 2007 edition's total of 26,316. In addition to Italian buyers welcomed by the show, most of foreign visitors came from Europe - especially Germany (which had an attendance increase of 5.3% compared to last January), Spain, Austria, Belgium, Greece and the emerging Eastern European markets. Visitors from the USA and Japan were slightly less than during the last seasons, with the strength of the Euro thought to be a cause.

Pitti Uomo saw a predominance of creative jeanswear companies and a return to the floor for some of them, including Closed and Meltin’ Pot. In addition, the latter’s parent company Romano celebrated its 40th anniversary on site, and unveiled a photo exhibition called "Blue Workers." Meltin' Pot showed a new design direction while its sister higher-end collection, Redux, offered tailor-inspired trousers for its second-ever season. Guru also returned to Pitti with the aim to communicate its increase in sales, and the launch of its new jeanswear line which is characterized by the brand’s famous daisy logo. In addition Pepe Jeans launched its new Andy Warhol collection, Shaft Jeans presented a series of new jeans made from cotton-silk and cotton-cashmere, while Parasuco Cult launched its “Denim Winter Therapy” healing jeans, which feature hand-stitched semiprecious stones such as turquoise and amber which - according to crystal-healing therapy - can have a positive effect on the wearer.

As well as denim, new sportswear was also on show, with the likes of Pirelli Pzero who offered jackets and caps which employed optical fibers that illuminate at night. Kejo, the brand of the Geospirit group, together with the Diadora sneaker brand, carried logo-laden items inspired by the famous Italian products such as Baci chocolates, Golia, licorice bon bons and Choco Street.

Converse celebrated its 100th birthday by redesigning its All-Star model with a thinner sole and a slimmer silhouette, as well a models inspired by music icons such as The Ramones, The Grateful Dead and Kurt Cobain. More music supported the launch of the new Woolrich worldwide collection, with a concert from Giovanni Allevi accompanying the brand’s first fashion show.

For the first time Pitti hosted an arena dedicated to womanswear: the W_Woman Precollection. The new section presented 15 high-end womenswear brands, giving an insight into new trends for f/w 2008-09, although it has someway to develop before it becomes an inspirational addition. Much more interesting was the show of the 6267 designer duo who presented a dreamy and sophisticated mix of dusty colors and Russianesque design with a '70s twist.