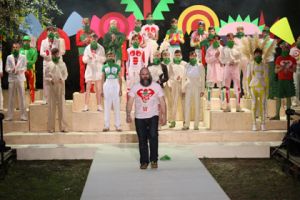 — June 24, 2008
Pitti Immagine Uomo (pittimmagine.com) has just closed its 74th edition (which took place 18-21 June), a successful unveiling and worldwide preview of the SS09 collections. The Florentine “kermesse” garnered great interest among visitors and buyers and a restored trust in the market’s potential thanks to this trade show’s scouting of new brands, talents and mega-trends. This edition of Pitti hosted about 900 brands and generated about 200 events that involved the Fortezza da Basso, the tradeshow’s main location, as well as the entire Tuscan city.

Numeric results appear stable in comparison to the June 2007 edition. The organization registered 35,000 visitors, of which there were about 20,600 buyers (compared to about 21,000 registered a year ago). Foreign buyers were 38% of the total with increased attendance from Germany, France and China in particular, but fewer from the UK, US Spain and Turkey and Japan – a trend put down to the strong Euro and a consumption slow-down in those countries markets. Stable in numbers were visitors from Russia, The Netherlands, Portugal and Greece while Italian visitors were also stable accounting for almost 13,000 people. In general all of these results appear positive considering the present critical market situation and the shrinking number of existing boutiques.

Focusing specifically on Pitti W, the second edition of the salon dedicated to women’s pre-collections, the organization registered about 4,000 buyers, 25% of which were from foreign countries from significant boutiques, department and specialty stores.

At the closing of the salon, Pitti Immagine CEO, Raffaello Napoleone announced a change that will affect future Pitti editions. Starting from 2009, Pitti Uomo and Pitti W will begin on the Tuesday rather than Wednesday, in order to run the show within working week days only. Accordingly, the new dates for 2009 will be: 13 -16 January and 16 - 19 June. “Every time that the calendar had brought Pitti Uomo too near to the end of the Winter festivities we moved the event to the following week,” explained Napoleone. “For this it is nothing new. In addition the decision to resituate the opening to Tuesday is due to meet with requests from both exhibitors and visitors, and to support insiders and media so that they can better follow the events to come as well as Milan’s menswear shows.”

On the show floor, despite the likes of Sixty’s Energie and Pepe Jeans not participating in this edition, other big groups joined the helm: Levi’s celebrated the re-opening of Luisa Via Roma store with the launch of its special limited edition 501 model (with gold-coated buttons); Lee participated the fair by exhibiting and presenting one of its Lee Rocks series of free concerts aimed to attract young fans of upcoming young rock bands, and also presented some of its new ads designed and created by its own customers; Dirk Bikkembergs presented its first soccer sneaker model within an event at the Stazione Leopolda; Boss Orange organized its own majestic show-event within Villa I Collazzi while presenting its up-market sportswear-driven collection; Walter Van Birendonck, special guest of Pitti Uomo, also celebrated his first show in Italy with a nature-driven collection and fashion show and event.; US designer Diane Von Furstenberg presented her cruise collection of easy-to-pack, easy-to-care-for women’s pieces.

Among significant trends, color was one of most outstanding aspects that characterized jeans-wear and polo shirts especially. Many companies focused on scented and casual-comfort garments: Sailwear brand Slam presented a series of perfumed Sensitive jersey tops which last for five washes. 40 Weft offered a trouser model that claims to massage the skin with moisturizing substances and essential oils.