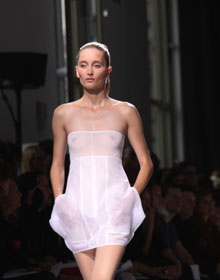 — October 12, 2009
"I just thought I'd clean it up. Make it strong and powerful—a kind of contemporary minimalism," said Phoebe Philo, new designer by Celine, after her show. Her statement got to the point of one of the biggest trends of this fashion week in Paris, which closed on Thursday after eight days and about 100 ready-to-wear shows and dozens of fashion events.

In post-crisis times, where even luxury companies are struggling against declining sales and revenues, the new minimalism might be a solution to boost sales by offering wearable ready-to-wear. But there is also another faction of designers who argue the opposite and are focusing on a feminine, nearly girlish trend for next summer, showing artful pieces with laborious drapery, delicate ruching and wrapping of jacquard and high quality textiles mainly decorated with embroidery. This trend played with volumes, such as ballerina-like dresses, which underscored the female silhouette of a small waist and bigger hips as seen at Chanel, Alexander McQueen, Loewe, Vivienne Westwood, Louis Vuitton and Giles Deacon, who showed the first time in Paris, courtesy of his ANDAM win.

As a third development for next summer, there was also a big trend of layering of extremely soft and fine fabrics, including lingerie pieces worn in a visible way. Designers including Peter Copping for Nina Ricci, John Galliano, Valentino, Christian Dior and Vanessa Bruno set the trend in an ultra feminine way using pastels and powdery notes, while designers such as Haider Ackermann and AF Vandevorst used the same idea but in a more gloomy way, showing outfits in gray or an earthy palette. Both had in common a fluid, flattering look, which was easy to wear and gives the customer a choice with which layers she wants to adopt.

Last season’s trendsetters Balenciaga, Balmain and Lanvin stood apart this season from those trends. After being copied in mass for his elegant draped skirts, Balenciaga turned to a harder and more masculine silhouette with motorcycle appeals and geometric patterns. Balmain developed his rock-style attitude forward, showing very sexy and shining cocktail outfits in the style of costumes from the film “Mad Max” mixed up with trouser-T-shirt-combinations in a grunge look. Lanvin, in contrast, stayed true to his elegance and sent models out in draped dresses with pleating over the catwalk.

More and more companies opened their shows to a wider public using the Internet and social platforms. Following the example of Viktor & Rolf two seasons ago, Alexander McQueen offered a live stream of his fashion show on his website, which was mostly overloaded. Louis Vuitton chose its own Facebook page through which to stream its show for 24 hours.