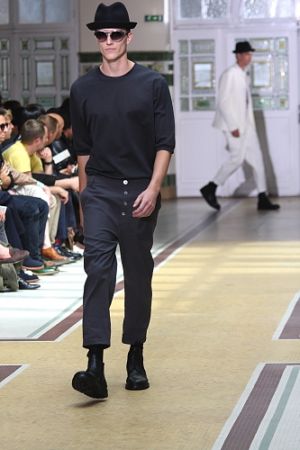 by Barbara Markert — June 28, 2011
The menswear fashion week in Paris, which ended on Sunday, was one of the biggest in the last seasons: More than 50 shows were presented within the official calendar of the Chambre Syndicale on four and a half days. Whereas the menswear collection of Christian Lacroix returned to the catwalk, some others, like Miharayasuhiro, were missing. LVMH, owner of the brand John Galliano, decided to present a regular show, just two days after the opening of the juridical proceedings against its former eponymous designer.

For s/s 2012, the designers in Paris seemed to agree pretty much concerning new trends for men’s fashion: Regarding colors, white, black, beige and especially blue (Cerruti, Dior) were dominating with some green and yellow accents as eye-catchers (Kenzo, Agnes B. John Lawrence Sullivan). Stripes and checks were spotted quite often on the catwalk, for instance by Viktor & Rolf, Raf Simons, Dries van Noten, Kenzo, Louis Vuitton and Issey Miyake.

Even if the trekking trend of last summer is over, the advancing casual idea of clothing is not to be neglected. Formal trousers were more and more mixed with jogging details. Rubber spring waistbands were seen even by conservative brands like Hermès and Viktor & Rolf. Jeans instead, have completely disappeared from the catwalk. The waistband stays high, but the leg joint went down as seen by Kris van Assche. The wide cut of the winter season hasn’t convinced the retailers, that’s why for summer 2012 the trousers have a straight cut. The slim fit is only used for men’s leggings which are combined with long tunics given a Bedouin attitude as by Rick Owens and his brothers in the designs of Damir Doma, Julius and Boris Bidjan Saberi.

Whereas trousers have a more casual attitude, tailoring stays important for jackets by Yves Saint Laurent, Thom Browne, Juun J. or Louis Vuitton. Jackets and cardigans or pullovers fit close to the body, mostly worn without a t-shirt or shirt underneath. Shorts remain a strong theme also for next summer and were styled with formal jackets and even polo-neck pullovers. Parkas undergo a revival as wide coats in light and flowing materials, like a K-Way seen by Maison Martin Margiela.

Apart from the shows, Stone Island opened its new shop. Moreover, Zegna has renovated its flagship in Paris and presented its new online store as an app for the iPad, where model and actress Milla Jovovich serves as an interactive store- and sales manager guiding the user through the rooms and the collection. The app was developed by James Lima, a Hollywood director working together for special effects with James Cameron and Steven Spielberg.