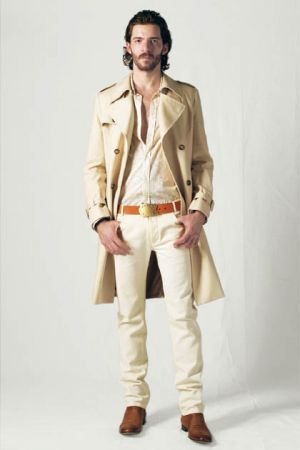 — June 30, 2008
A tight schedule again marked Paris Men’s Fashion Week, which was held June 26 to 29. More than 40 shows ran during these four days but some of the big names, including Givenchy, Yves Saint Laurent and Martin Margiela, opted to give presentations instead of doing catwalk shows.

Simutaneously, the men’s editions of the trade shows Tranoï (tranoi.com) and Rendez-Vous (rendez-vous-paris.com) took place, each of them split in two locations. Tranoï hosted about 135 new luxury brands, including Anhagen, Ksubi and Hannes Roether, at La Bourse and Rue Herold. Rendez-Vous featured approximately 70 luxury street and designer labels. There, next to well-known names such as Baracuta and Schmoove were new names such as Uniforms for the Dedicated or Arne & Carlos.

It was also the French premiere of Capsule (capsuleshow.com), which ran June 26 to 28. This first Paris edition of the New York-based show was located in a historic building in the Marais district and featured about 30 brands such as Public School, Fifth Avenue Shoe Repair and Wood Wood.

The shows’ organizers did not provide visitor numbers but each event realized a constant flow of guests, including buyers from both big stores and smaller trend stores. “We keep the level of a good buyer quality,” Nic Jones of Rendez-Vous said.

Salespeople noted that it was a bit calmer than prior seasons. Still, the main buyers – many of them from the Far East – were all around. “The level of retailers is really good. We only missed the French buyers here,” said a sales agent for the Swedish fashion brand Fifth Avenue Shoe Repair.

Trendwise there were no big surprises: sportivity was an overall topic in the collections and relaxed fits, sporty details and technical fabrics were popular as well. There also was a slight tendency to soft layerings. Warm and earthy tones dominated, even though the color palette became a bit richer and showed a bigger variety of olive, orange, beige and stone tones.