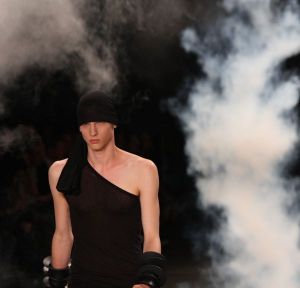 by Barbara Markert — July 01, 2010
With around 50 shows on the official calendar, numerous showroom presentations and evening events, men’s fashion week in Paris for the spring/summer 2011 season was one of the biggest ever.

The French metropolis, known for hosting the most creative designers in fashion, stayed realistic and offered wearable collections. Except for several brands, the colors black, white, gray, beige and earth tones dominated this fashion week. “Real” colors, such as red, yellow or the frequently chosen green or mint, operated as accents, as seen by Hermès, Raf Simons, Issey Miyake, Cerruti, Ryynshu and Yohji Yamamoto. Jean Paul Gaultier and Kenzo diversified their mostly monochromatic looks with stripes. And Ann Demeulemeester sent out identical designs each in white and black.

One of the biggest trends for next summer concerns the make of clothes in an unconstructed form: selvedges are raw or unfinished, threads stick out, symmetry is repealed, lining and shoulder pads are left out, and sleeves are missing. The best example of this fashion trend, which lends a certain laziness to menswear, was Dior Homme. Dior designer Kris van Assche designed a collection with jackets and coats, which were tailored only on one side and the other side formed by the natural drape of fabric.

Meanwhile, trousers stayed quite short, mostly to the ankle or shorter as in Bermuda-length or cycling shorts (Lanvin) combined with formal jackets. The US designer Thom Browne concentrated his whole collection on these Bermuda-suit-jacket-combinations. The cuts, however, were quite different. Aside from the extremely large cut trousers by Raf Simons, Kris Van Assche and Martin Margiela the silhouette remained more or less straight or controlled by pleats or with volume on the hips and slimmer leg openings. The waistline also often started higher than in previous seasons.

Designer also played knitwear off transparency in expensive fabrications such as summer cashmere and silk, as seen at Viktor & Rolf, Dior and Hermès. Belts, scarves and neckerchiefs all came together, with big hand- and travelbags the most important accessories, as shown by Louis Vuitton, Paul Smith, Miharayasuhiro and Juun J. The rucksack was also back and paired with trekking sandals, which are combined with any style, from formal-classic to sports- and urbanwear.

The newcomers, including Boris Bidjau Saberi, Tim Hamilton and Damir Doma, created the lazy look with layering and worked with washed and oversprayed fabrics, as Kris Van Assche showed.

In addition to this season’s fully charged calendar and the fashion fairs Capsule, Rendez-Vous Homme and Tranoï Homme were several notable events. Balenciaga opened a menswear store in Rue de Varenne; Lacoste presented its new Holiday Collector’s Series designed by the Chinese artist Li Xiaofeng, Hermès its new watch Carré H, and Puma its new eco-friendly smartphone, powered by solar energy. The events, ending on Sunday, in all showed a city aiming to play an increasingly important role in the growth of menswear.