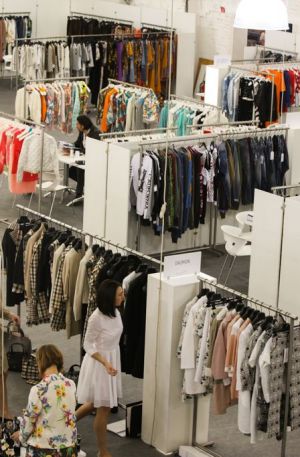 Impression from the Gallery, Düsseldorf
Stories

by Lisa Dartmann — July 30, 2014
The order weekend in Düsseldorf (25 to 29 July) with the fairs Gallery, Supreme and Date, as well as the order activities in over 800 fashion showrooms and the fashion houses under the roof of CPD ended successfully. Düsseldorf established itself as the order platform – with no party but business atmosphere. In general the order atmosphere was good and the exhibitors were happy with the frequency. Despite the political situation in Russia, many buyers from Russia frequented the order days as Düsseldorf remains the traditional platform for Russian buyers.

The Gallery had about 5,000 trade visitors in the three trade show destinations “Botschaft”, “Hammer Hallen” and “Rheinlandsaal”. Renowned department stores and retailers such as KaDeWe, Braun, Jades, Uli Knecht, Frauenschuh, Lodenfrey and others sent their buyers to see the 450 presented labels. Ulrike Kähler, project director of National Trade Shows at the Igedo Company, said: “Underlying concepts play a more prominent role in today´s information society. Our exhibitors have responded to this and have adapted the presentation of their label.” The further development of the trade show concept proved itself worthwhile. Visitors from 16 countries used the shuttle service linking the various segments of the order platform. Highlight of the supporting program was the title “First German Design Ambassador” from the Association of German Fashion and Textile Designers, which honored Düsseldorf designer Thomas Rath. At the Gallery’s selected shows, powered by Igedo Company, nine labels presented their fashion collections for SS 2015 at the former screw-making factory.

Supreme ended also positive. With more than 450 collections on four floors the Homebase at Bennigsen-Platz was completely booked. “We have a lot of demand and we already had additional space for this season. We will probably expand next season,” said Mirjam Dietz, Munich fashion company. The Supreme team was happy with the frequency and international visitor number. The inspirational atmosphere and the nice decorated open stands got good response. Highlight was the evening event Supreme presents ACO summer sessions, powered by Maserati with 800 guests.

Last but not least, DATE, the show for hats, caps, shawls and accessories at the Fashion House had about 2,000 trade visitors from 20 countries. “We are the only fair for hats and have rising visitor numbers every season”, said Michael Arlt, of DATE fair. With a short break DATE will run from July 30 to August 1 parallel to the GDS shoe fair. There will be a shuttle service between Fashion House and Düsseldorf fair.