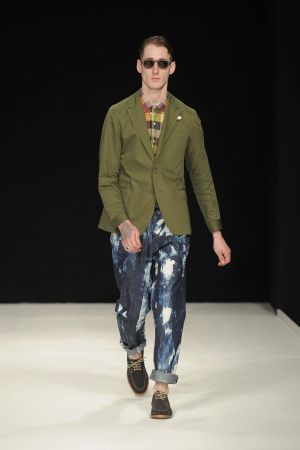 Spencer aims to expand worldwide, while keeping faithful to his high quality, sophisticated and modern British brand. Founded in 2002, Oliver Spencer has grown and today sells at over 151 stores worldwide and has five stand-alone stores (four in London and one in Toronto, Canada). At present his total revenues are €10 million, 40% of which comes from the UK, followed by Japan. Also significant is his presence in Italy (25 doors, among which Excelsior and Antonia in Milan, and Folli Follie in Brescia) in the US (24 doors) and Canada (18 doors).

"My aim is to reach a total of 15 monobrand stores by 2018 to open in cities such as Tokyo, Hong Kong, Milan and Paris," he explains, while planning to open two new stores in London by end 2014 and, in the same year, organize an event that will take place in Milan, during Milan Design Week in April.

"I want to slowly establish the brand by creating my own platform by myself," stressing how the brand's identity is consistent with its approach to business. "Oliver Spencer is a man's modern uniform. It is artisanal and eclectic at the same time and mostly appreciated by a confident guy, who is not a sheep - in the sense that he doesn't follow mainstream trends blindly or wears a single brand from head to toe, but rather likes to mix and create his own interpretation of style. "He follows fashion independently since he is not a conformist. He likes colour but not for the sake of colour, but because he likes to create his own mixes."

Spencer's wardrobe is contemporary and draws inspiration from the world of art, architecture and London’s always evolving subcultures. British wools for winter and Italian cottons and linens for summer are the preferred fabrics, tailored to create modern fits and garments with characteristic details such as detachable collars, hidden pockets and various accessories. The line has recently evolved to include footwear (Made in Portugal), sunglasses (Made in Italy) and leather accessories (Made in UK). 70% of the collection is produced in the UK and the remaining 60% is made in Europe, between Portugal and Italy.