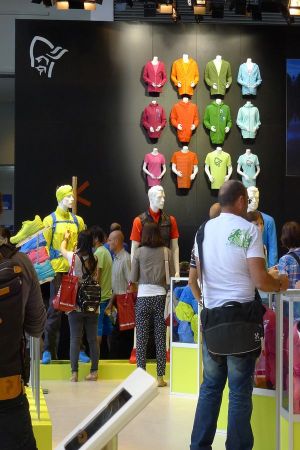 by Regina Henkel — July 17, 2012
After years of growth, Friedrichshafen, Germany’s OutDoor trade show closed its doors with an increased number of visitors and exhibitors on July 15. 907 exhibitors (compared to 890 in 2011) met with 21,730 trade visitors (2011: 21,520), demonstrating the market’s confidence. Although the first day felt a bit weaker than previous years, OutDoor still proved its strong position as the leading international trade show for the whole outdoor business. Mark Held, Secretary General of the European Outdoor Group (EOG), explained, "Prior to the show, there was a degree of anxiety about the current economic slowdown and what impact it might have on the OutDoor. Economic times are tough, but the outdoor industry demonstrated that it is resilient, forward-looking and still full of enthusiasm. As a result, OutDoor was just as vibrant, lively and exciting as ever and the number of attendees was just fantastic.”

Besides the usual weather complaints and the general economical turndown, the fact that the outdoor market has approached certain limits in various national markets was another reason for lessened enthusiasm. The growing rates are declining in most European countries, despite the high interest in outdoor products in recent years. CEO of Mammut Sports Group Rolf Schmid said, "The show went well. Even though you can certainly sense some uncertainty in the entire industry right now, we are convinced that this will soon pass and that outdoor will remain the mega-trend that it has been.” 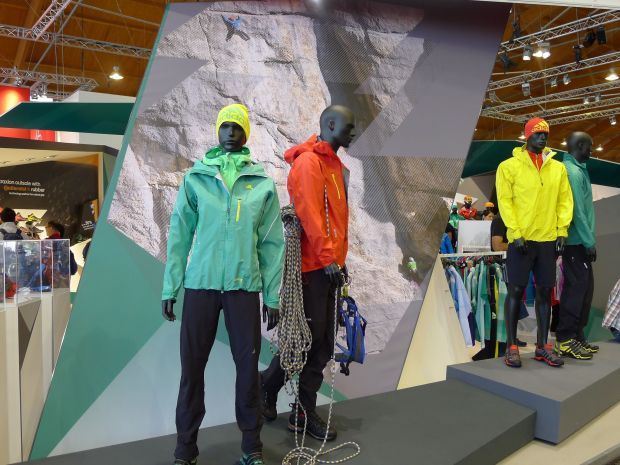 One of the most interesting innovations at the fair was the series of amazing new functional fabrics made from natural materials. Schoeller Switzerland developed one made from recycled cork and was rewarded with the OutDoor Industry Award. Schoeller’s Dagmar Signer commented, “Cork can be used as a soft shell material and provides significant improvements in insulation compared to traditional soft shells while maintaining a high degree of breathability and comfort.” Tatonka presented soft shells and jackets made from coffee production waste material, which requires less energy, fast drying and offers high UV-protection. Triple2 uses fabrics made from coconuts in combination with merino wool; the Cocona® fiber accelerates the drying of wool, making the garment more functional in sports. Tencel, a highly functional cellulose fiber, was also visible in more and more collections.

Trail Running was again noted as one of the most important growing sports in the outdoor segment with more running collections than ever before. Traditional Mountaineering brands like Mammut, Patagonia and Arc’Teryx increased their apparel and footwear offers in trail running collections. La Sportiva, the Italian footwear specialist presented its first summer apparel collection, also dedicated to trail running. 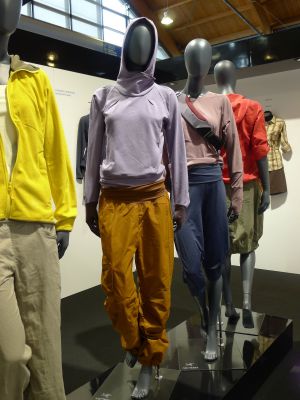 Arc'Teryx new extended casual line
When it came to styles and colors, the trend for more fashionable and casual looks remained strong. Arc’Teryx presented a whole line of casual outfits for the first time while bag brands like Tatonka, Pacsafe and Ortlieb showed more urban styles with herringbone fabrics, among others. CamelBak, a brand focusing on hydration backpacks and bottles, presented its first urban series with stylish cotton and leather knapsacks. Colors were again strong, but not as bright as last year’s. Fjällräven’s new Kanken range, for example, took on a series of earthy shades.