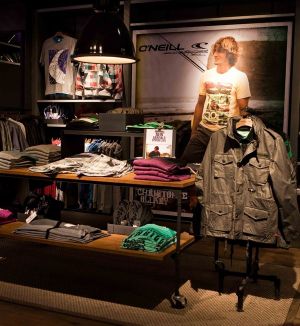 by Regina Henkel — April 01, 2011
O'Neill opens two new stores these days, both showcasing the brand's retail concept based around founder Jack O'Neill and his iconic cliff-top home perched high above the Pacific coastline in Santa Cruz, California. The two new store openings are the latest achievements in O'Neill's ambitious retail expansion plans. In 2010, new or revamped retail presences were established in a number of European cities, including Hamburg, Illum, Bridgend, Cheshire Oaks, Sheffield and Milton Keynes.

The first of the two new stores was opened in Dresden and is located in the newly-extended wing of the ECE shopping center Altmarkt-Galerie, with a sales area of 150sqm.

The second new O'Neill store will open its doors tomorrow, April 2, and is located in Hasselt, Belgium. The store with 250sqm is located in one of the city's prime old town shopping destinations, bringing a bit of Northern California right into the heart of the city.

Looking ahead to the future, O'Neill is pushing its retail concept rollout plans by opening a minimum of five new branded retail stores by the end of this year. The plans include new spaces in the Netherlands, Belgium and Germany.

O'Neill's Peter van Kampen, Head of Retail, commented: "These latest new store openings in Dresden and Hasselt form part of our ongoing commitment to roll out the brand's retail concept. We want as many people as possible to connect with O'Neill, and our stores help us achieve this aim by providing shoppers with a really great 360 degree brand experience."