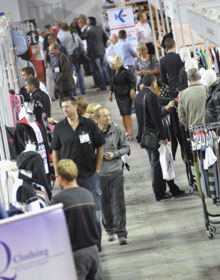 — November 04, 2009
Following its debut during the last week of September in Warsaw, Poland, fair organizers of the Off-Price Show have decided to continue with the concept in mainland Europe.

“The Poland launch of the Off-Price Show has gone very well indeed in challenging market conditions, establishing the show in central Europe, and opening up brand new and much needed retail markets for European fashion companies,” said Event Director Buzz Carter. “We have immediately announced exciting plans for the next show in Poland in 2010 (Jun. 22-23, Warsaw) and are delighted that over 50% of the new floor plan is already sold out before its official release.”

The September show, which presented a wide selection of fashion collections from leading clothing, accessories and footwear suppliers, drew buyers from over ten European countries. Established in London nine years ago and in the US since the mid 90s, the show, with its focus on end-of-season and surplus fashion ranges for retailers, has evolved from its humble origins in a west London hotel at the start of the decade to its first overseas edition in Poland under the organization of London-based IDEX exhibitions. Further international launches are being planned for Spain and the Middle East, though details are not confirmed.

The next Off-Price Show will be held in London in March 2010.