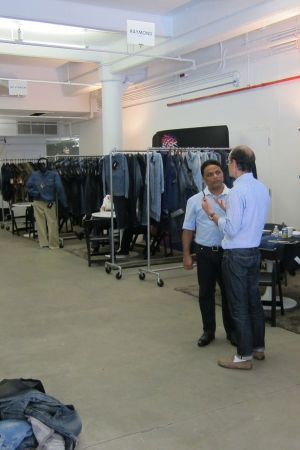 No Blues for First Blueprint Show

by Christopher Blomquist — June 30, 2015
After completing its maiden two-day run in last week, the newborn and admittedly tiny New York-based denim sourcing trade show Blueprint will be back in the first week in December confirmed show founder and producer Bill Curtin to SI during its onsite first edition wrap party in Manhattan’s Meatpacking District on Thursday night. “We are looking forward to increasing the quantity of people here but still keeping it intimate and cool. We don’t want to turn into something that was not what we intended from the start,” he said.

“We had a good show and I think we kind of hit a homerun bringing back the New York style show back to New York. It’s picking up on the trend of shows being a little more intimate, interactive and creative,” he added.

Featuring just nine exhibitors, the bulk of which were denim mills including Orta and Raymond, this first edition of Blueprint won mostly positive reviews from both exhibitors and visitors.

“We had a good show and people really responded to our Vegan Collection,” said Alison Wohl of Orta, which debuted its first New York showroom on the eve of Blueprint.

The show differentiated itself from other sourcing-driven shows with an onsite denim customization area and a wall of vintage denim jeans that were available for sale and instant carry-away. Visitors were also requested to ink their thumbs and leave their “blueprint” on a wall in the entrance area, which by the show’s end made for a most interesting pattern.

“I really think that this show is great because it is interactive, the vintage wall was inspiring because I was able to able to buy stuff and the whole hands-on approach to it is boutique and we lost that,” said attendee Christine Rucci, a longtime denim consultant and owner of the denim consultancy firm Godmother NYC Inc. “It’s not always about trends; it’s about environment and I think that this is an environment of DYI , Made in New York, Made in America, hands-on.”

“What [Blueprint] has done is capture the intimacy that started these first denim shows,” she added. “I think that is important because big shows are overwhelming. It should be focused on trends and inspiration and this show was an inspiration.”