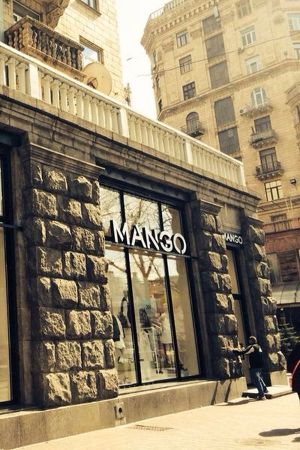 by Lorenzo Molina — April 17, 2014
Spanish fashion chain Mango has recently opened a new shop in Kiev (Ukraine), promoting their “Megastore” concept.  The company introduced this expansion approach in 2013 in order to offer the several fashion lines of the brand under one roof. One of last’s year megastore openings took place in Munich.

So far only the first phase of the opening has been completed: a sales area of 485 square meters that showcases the women and kids collections of Mango. A second area with an additional space of 512 square meters will open its doors in summer, including the menswear line H.E. by Mango. Ukraine represents the second most important market for Mango in Eastern Europe, just behind Russia. During this year, Mango plans to roll out five more retail spaces in the Ukrainian cities of Kiev, Donezk and Lemberg. Two of them will also be megastores.

Mango, headquartered close to Barcelona, increased its sales by +9% in 2013, in comparison to the prior year and obtained a profit of € 120.5 million.