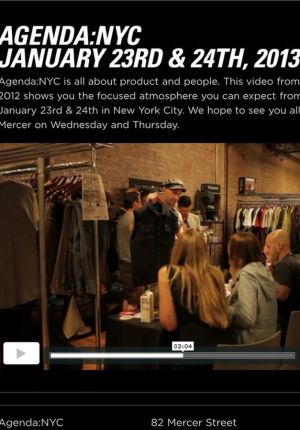 by Christopher Blomquist — January 28, 2013
The final of the six New York shows to open last week, Agenda completed its two-day run on Thursday, January 24 and was heralded as a whopping success. Skate-, surf- and streetwear driven as always, this latest edition featured about 170 brands on two floors at 82 Mercer Street in SoHo. The show was bustling on Thursday but all exhibitors reported that traffic was slower than the day before when visitors literally packed the aisles.

Numerous brands, such as 10 Deep from New York, were not showing their fall 2013 offerings ybut still selling spring items and immediates, such as floral print tees and a camo-mix button up. Sales director Josh Fishel explained that 10 Deep will debut its fall items in Las Vegas next month instead.

Those that did have fall ready tended not to stray from tried-and-true items such as graphic tees, varsity jackets and caps. Feltraiger showed its new sibling line RatMouth, which consists of snarky graphic tees and caps with phrases such as “Bite It You Scum” and “SSSuck It!” New York-based brand RockSmith, which originated in Japan, offered a blue varsity jacket with orange sleeves and a baseball-inspired “Ninjas” top. Trukfit also had varsity jackets, as did WeSC, which also showed a forest-animal print sweatshirt, a navy cotton pea coat, a full line of jeans and some bright 1970s-style nylon sneakers.

Other interesting footwear styles were on view at Android Homme (floral-print high-tops and textured bright red models) and Creative Recreation (a red leather high-top decorated with zippers, animal-print styles and catwalk-inspired metallic ones).

Interesting and affordable denim was on view at Born Fly, a brand created by Jacob Harris, owner of the Brooklyn streetwear boutique Vinnies. He explained that the collection was born strictly as an in-house line but is now being wholesaled to other doors.

Finnish snowboarding brand Makia showed some great high quality knits and a plaid fleece-lined cape. Glamour Kills also impressed with its women’s 100% knitted sweaters which resembled message T-shirts. One has a skull graphic and reads HELL YEAH while the other features the face of a cat and reads CHILL OUT.

Finally, California-based accessories brand Hex offered clean, modern design (it will soon be working with the design-centric retailer Design Within Reach) with its various bags and electronic device holders–plus two amazing sets of headphones that retail for around $200. One is a striped fabric model while the other is in mock croc skin.