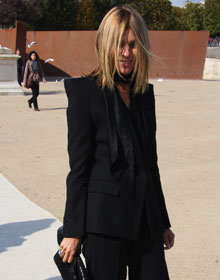 — February 22, 2010
The word’s biggest international fashion prize ANDAM has received another endowment, raising the total value of the award to €220,000. The €60,000 boost is attributed to two additional sponsors: Renzo Rosso’s Only The Brave fashion group and Canada’s Hudson’s Bay Company. They join a powerful roster of ANDAM sponsors that include LVMH, Galeries Lafayette, L’Oréal, Saks Fifth Avenue and Longchamp.

With this total amount, “the ANDAM fashion award reaffirms the preeminence of Paris on the international fashion scene,” said its founder Nathalie Dufour.

But that is not the only good news. Dufour also announced that Carine Roitfeld, editor in chief of Vogue France, has agreed to chair the 2010 judges’ panel. “I am happy and proud to be offering my experience and contributing to the selection of tomorrow’s talents. Providing support for young designers is an integral part of our mission at Vogue Paris as well as a deep personal commitment of mine,” said Roitfeld.

This is the first time that Vogue France is extending its support to young talents in fashion. Other Vogues, such as US Vogue and Vogue UK, have already been supporting initiatives such as the CFDA/Vogue Fashion Fund and British Fashion Awards, respectively.

Roitfeld joins at the judges’ panel a respected group of fashion experts including Hilary Alexander from the Daily Telegraph; Sarah Lerfel from Colette; Alber Elbaz from Lanvin; Jean-Jacque Picart, the famous fashion consultant; and Pamela Golbin, curator of the Musée des Arts Décoratifs.

Founded in 1989, the ANDAM prize is open to fashion designers of any nationality who are under 40 years of age as of January 1, 2010 and are working in France or have plans to develop their business in France. Open call ends April 16, 2010. Entry materials must be submitted to ANDAM, 1, rue Berbier du Mets, 75013 Paris, France. Entry forms may be downloaded on the ANDAM website.

The five finalists will be officially announced in early May 2010 and the year’s winner in June. The crowning ceremony will take place in Paris during Fashion Week in October.