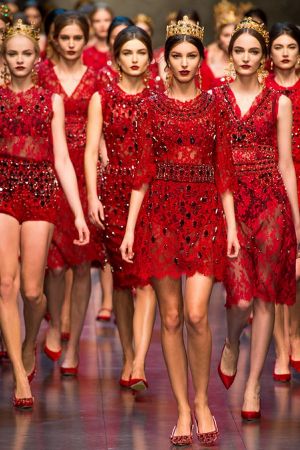 by Maria Cristina Pavarini — February 27, 2013
Another Milan Fashion Week has just closed its doors registering a significant success by welcoming an estimated 15,000 buyers and 2,000 journalists, many of which were international visitors (especially from Russia and Eastern countries), 71 fashion shows and a total of 127 brands.

The event held between 20th and 26th February 2013 presented womenswear anteprimas for the F/W 2013/2014 season indisputably focused on innovation, craftmanship, Made in Italy and luxury. Despite the record bad weather conditions (there was snow and cold temperatures every day), economic difficulties, The Italian election, polemics with other international fashion weeks and a soon to be renovated board of directors of the Italian Fashion Chamber, the event's working atmosphere was professional and fun at the same time with many events and parties crowding the entire fashion week.

The protagonist of this editions of Milan catwalk shows is a complex woman with many personalities, shifting between spirited romanticism, as a princess covered with multicolour furs (Roberto Cavalli), or as divine as a Bizantine-style Madonna covered with gold mosaics and precious stones, while wearing golden crowns (Dolce&Gabbana), but also as a rigorous and stoic personality, when wearing austere and clean items (Marni and N.21). The catwalk shows were often mixed masculine and feminine attitudes, as well as flying back in time picking ideas from past decades such as the 50’s (Prada), the 60’s (Scervino and Chicca Lualdi Be Queen) and the 80’s (Versace and Iceberg), and were reinterpreting every attitude in an apparently casual, nonchalant and careless way.

Dreamy princesses
Furs and fur details ruled through almost every fashion show with short jackets, vests and coats in most different fur type such as fox, astrakhan or mink, reinterpreted in different colour and type of fur combination in the same item, or with multicolour stripes (Fendi). Marni decorated jackets and coats with small capes, or gorgeous collared fox stoles. Mink details items like a mink scarf complemented 50’s inspired grey dresses (Scervino) or small sleveless tops in mink (Chicca Lualdi Be Queen).

Color me bad
Always inspired by dreamy atmosphere were red tzar-queens seen at Dolce&Gabbana, or urban calfskin outfits (John Richmond), or red printed dresses (Bottega Veneta). Flaming red outfits were hot at Just Cavalli and Blugirl often reminding of red dragon patterns and Chinese imagery, Alternative hues were either plain bottle green, bordeaux, mustard, or mixed with blue, brown or black (Dondup, Emporio Armani, Gucci, Gabriele Colangelo, Isola Marras and Marni). Also new was the employment of pastel and make-up hues for winter as seen at Emporio Armani that mixed soft mohair items with silk chiffons and taffetas or with non-colours as presented by Trussardi, or more masculine-meets-feminine as seen at N.21.

It's a fantasy world
In Juxtaposition to full colour outfits were clashing mixtures of patterns as seen at the energetic MSGM that mingled checks with flowers and pastel hue fur jackets. Marni opted for outdoor prints of imaginary forests - be them white and black or in cold light blues and green landscapes. Etro opted for computer graphic trompe-l'oeil patterns also hyped by the augmented reality effect catwalk background, while Antonio Marras stole inspiration from decor and wallpaper motives.

Stepping ahead
More innovation characterised the employment of unfinished hems and surfaces as well as the metallic hues and yarns as well as innovative silhouettes. Gabriele Colangelo mixed all this in high-tech fabrics, coats and clothes that employ metallic hues or woven inserts of technical fabrics added to hairy wool jackets and coats. Also in love with unfinished surfaces were Bottega Veneta and Byblos. New dreamy silhouettes were developed by Emporio Armani who designed wrap around long egg-shaped skirts made with flock velvets -lightweight but voluminous and feminine perfect for modern princesses. Golden and metallic were hot also for Etro who reinvented a sporty boxy outer jackets with metallic effects. Then golden precious outfits were hot for Dolce & Gabbana, Ermanno Scervino, Antonio Marras and Philip Plein who also hosted Grace Jones as special guest opening his show.

Sporty and chic
Sporty and sophisticated is Woolrich’s newest women's collection that has been redesigned to employ sophisticated materials such as silks and wools, as well as by reinventing the late 1960’s Eskimo jacket to make fitted and feminine hi-tech parkas, Massimo Rebecchi opted for silk dresses with contrasting colour raglan sleeves - a chic cross-over between the rugby shirt and the silk dress. Hudson Jeans presented a special capsule collection at Excelsior. Testimonial for the occasion was Georgia Jagger wearing black and white striped skin-tight jeans. Jet Set presented its newest collection that reinvented all of its historic prints and archive patterns and models into waterproof silk, cashmere and wool mountain apparel and leisure wear.